I Wish I Was Lex Murphy by Luisa Plaja (Guest Post) 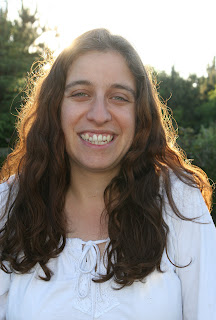 I am really pleased to present a guest post by Luisa Plaja - the author of Extreme Kissing, Split by a Kiss, Swapped by a Kiss and Kiss Date Love Hate.  I shall hand you over...
---

The novel that's now Kiss Date Love Hate started its first-draft life many years ago with the title I Wish I Was Lex Murphy.

It wasn't exactly the book you'll be able to read now, but it also wasn't a million miles away. There was magic. There were game settings and adjustments to profiles that came true in real life and caused all kinds of relationship mayhem.

There was Lex, a girl who wished she could be someone else. (Anyone spotted a common theme in all my novels?!) And George, a kind and generous boy who was never seen as boyfriend material by anyone, much to his misery. There was Matt, the perfect ex that Lex dumped but never quite got over. And Drew: mysterious, misunderstood and always kind of smouldering. Gemma was an ex-friend. George fancied Jess and Jess didn’t notice. The cast were already, in Lex’s words, “all in a love chain made of broken links”.

Also present from the outset was the film theme. In fact, this is how Kiss Date Love Hate really started; not from the premise of a girl who controls her friends' lives and loves from the settings of a computer game, but from the idea of a film-loving girl who was named after a movie character, and who wished she could be more like that character - in Lex Murphy's case, a capable computer whizz who saves the day after people start meddling with the forces of nature. (In Kiss Date Love Hate, though, Lex is one of the people who does the meddling.) 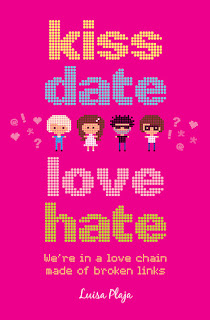 Lex Murphy as Lex Murphy from Jurassic Park (played by Ariana Richards) - how Lex wishes she was...

"I’ve always been into films. I’m named after a film character, after all. Mum was watching the dinosaur movie Jurassic Park when she went into labour, and she thought it was funny that the child characters had the same surname as us, so she gave me the same first name as the ‘clever blonde girl, Lex Murphy’. And she ended up with me: the Improver bald-patch girl, Lex Murphy. It says ‘Alexa’ on my birth certificate, though, because my nan thought it was a more sensible name and talked Mum into it. But I’ve always been Lex, except when I’m in trouble."

Lex Murphy as Arwen Evenstar from The Lord of the Rings (played by Liv Tyler) – Lex as seen by George (who wishes he was a film-star, too – ‘a very young George Clooney’)

I peer at the screen. It’s a skinny girl who looks like an elf with medium-length brown hair. And . . . a clumpy bald patch! Oh my God! ‘That’s me! Well, me crossed with that girl-elf from Lord of the Rings.’ I turn to face him.
‘You said I should try some other girls.’
‘Ugh! George! I didn’t mean me! That truly is pervy! You’ve made me look like one of your elf crushes.’
‘You do look a bit like Arwen Evenstar,’ he says nerdishly. ‘In real life, I mean. And I do not have elf crushes. Though you should say “elven” crushes, and Arwen is actually only half elven.’

Of course, Lex isn’t really anything like either of these characters. You can see her start to work out and accept who she really is in the course of Kiss Date Love Hate...
----
Thanks Luisa!

I found this guest post to be fascinating! I love how a lot of the characters stayed the same and the situation around them shifted into something entirely different. Very interesting :)