Review, Interview and Giveaway: Don't Judge A Girl By Her Cover by Ally Carter. 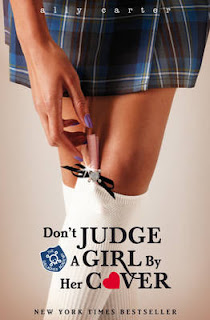 For Review: Orchard Books.  Published January 2011
From Amazon:  Here’s the thing about covert operations: the really bad things always happen when you least expect them. The enemies don’t give you a heads-up. And they never let you stop to put on comfortable shoes.

A spy-in-training, Cammie Morgan has a cover for every occasion. But what happens when she is forced to lose her cover to save her best friend, Macey? Cammie and her friends are determined to hunt down the group that threatens to tear their secret sisterhood apart. This time it's personal.


I really look forward to new books in this series.  I'm a bit addicted to them if I'm honest and this was another fun installment.

When Cammie visits her friend Macey in Boston things don't exactly go to plan.  Unless the plan was being ambushed! Or finding themselves part of an attempted kidnap they barely manage to escape. Desperately wanting to help keep their friend safe,  Cammie, Liz and Bex use their spy skills to find the truth...

I really like how the author manages to give us a completely different story each time but at the same time continuing the overall arc.  This time it focuses on Macey and Cammie, but the others are on fine form too.  I found Macey's storyline really interesting - she forced into the limelight because of her father's political campaign and you can see how it has an effect on her.

I loved Cammie in this one.  She's very protective of her friends and determined to be there for Macey.  I love Cammie's voice - it's the trademark of the series for me - so I love having the story told from her point of view.  Aunt Abby makes an appearance and I really liked her - although I wasn't sure if I completely trusted her.  However, I completely agree with what she says about Mr Solomon!  Someone really did have to do it!

Zach is back and I adored the scenes between him and Cammie.  I think my only complaint was that there wasn't enough Zach - I wanted more!  This time though I have no idea if we should trust him or not.  Also, I'm slightly worried about whether I should trust Mr Solomon, which will break my heart if proved true as I love him!

Again the were surprises and things I didn't see coming.  I was left with even more questions making the next book a must read.  I need to know what is going on!  I pretty much inhale these books as soon as I get my hands on them and I can't wait for the next!  Great fun and totally addictive! 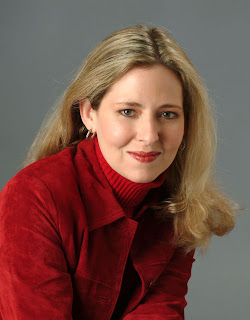 Ally Carter kindly agreed to answer a few of my questions...

How did you come up with the idea for the Gallagher Girls Series?
My agent emailed out of the blue one day, suggesting that I try my hand writing for teens, so I immediately set to work thinking of ideas (which were all terrible). Later that evening, I was watching the TV show Alias which, of course, was about a spy. During the episode, I wondered what it would be like to go to a boarding school for spies, and the rest as they say is history.

I love the whole concept of a spy school! Did you need to do a lot of ‘spy’ research for the series?
Thank you! Initially, I did quite a bit of research so that I could set the school up in the most believable way possible. What subjects do undercover operatives study? What kinds of training exercises do they do? What are the skill-sets the clandestine services would value most? Now I still do research but it’s more specific to what I need for a certain situation or when I’m looking for some inspiration.

I love Cammie, Bex, Macey and Liz! How did you come up with their characters?
Cammie came first. I’d heard once that real undercover operatives aren’t really the stand-out beauties that the movies make them out to be. In the real spy biz, it pays to blend it, so I knew my main character had to be “the chameleon.” From there, I knew that her best friends should all be strong where Cammie is weak, and I essentially just went to the extremes in every direction, and that rounded out the cast.

How many books are planned for the series?
I don’t have a firm outline in place for the whole series, but right now I’m thinking six might wrap it up quite nicely. That plan could change, but it is the current plan for what that’s worth.

If you could cast a TV or film version of Gallagher Girls who would you choose for the roles?
I get this question a lot, but the very sincere answer is that by the time I’ve heard of a teen actress she’s far past her teens. That’s why it’s a very good thing that I would never have any say on any casting decisions IF the Gallagher Girls were ever portrayed on film (which is a massive “if”, especially considering the books are currently not under option anywhere).

What was the road to publication like for you?
Like most writers, I initially looked at the publishing process as if it were Mount Everest, thinking it would take a miracle to see the other side. But, like Everest, you just climb it step by step, day by day. And it starts with writing a book and rewriting it until it’s publishable; then you research literary agents and go through their submission procedures. Really, writing the good book is the hard part. Once you do that, it’s really all downhill.

Was it a conscious decision to write YA?
Initially, I just wanted to write. It was my agent who suggested I might have a better voice for YA and she was right. This very much feels like my home genre.

What is a typical writing day like for you?
I wish I had more a strict writing routine—that’s certainly a goal for 2011. As it is, I’m a bit of an inertia writer. When I’m writing, I’m writing almost constantly. Then when I get a little break I don’t write at all. As for what my day looks like, I tend to do my best work in the afternoon and evening, so I spend my mornings running errands, taking care of email and my website and other paperwork types of things. Then I get to work!

Are there any ‘must haves’ you need before you can sit down to write?
Not really. I usually have some water or something else to drink. What’s far more important are the things I CAN’T have if I’m going to get any work done—like internet or people to talk to. Basically, if it’s a potential distraction, I need to have it far, far away.

Are there any YA books you can recommend? Perhaps something you read recently that just blew you away?
I absolutely loved Holly Black’s WHITE CAT and its forthcoming sequel, RED GLOVE. I’m a huge Rick Riordan fan and thought THE LOST HERO was pure genius.

And finally, what’s next for you?
Right before the holidays I finished up Heist Society 2, UNCOMMON CRIMINALS. That will be released in the US in June of 2011. The next order of business is to write Gallagher Girls 5. I don’t have a title or release date yet, I’m afraid, but I’m sure I’ll be talking about the writing process both on Twitter and my blog, so stay tuned in to those places for updates.

Thanks Ally!  I can't wait to read the rest of the series and am really looking forward to Heist Society!

You can find Ally at the following places:

Thanks to the wonderful team at Orchard Books (Hachette) I have 10 copies to giveaway!

Contest is open to UK entrants only.
Closing date is 20 January 2011
You don't have to be a follower of my blog to enter.

Just fill in the form below - good luck:)
This giveaway is now closed.
Posted by I Want To Read That at 06:00

Thanks for a great review and interview. I really have to read this series, it sounds fantastic.

What a fab interview :D
I have the 1st two books and would love the third *crosses fingers*

Great interview! I loved the show Alias and it's partially why I picked up the first book in the series :)

Great interview and thank you for the giveaway! I think I accidently entered twice because I forgot if I had entered or not..Lol ;)