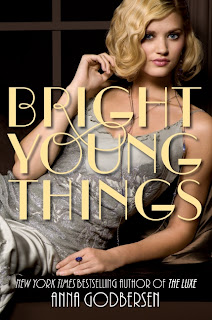 For Review: Puffin  Published 6 January 2011
From Amazon: It’s 1929 and Letty Larkspur and Cordelia Grey have escaped their small Midwestern town to chase big dreams and even bigger secrets. Amongst the glittering metropolis of New York City, they meet Astrid Donal, a flapper who has everything she could ever want, except for the one thing Letty and Cordelia have to offer—true friendship. Set in the dizzying summer before the market crash, against the vast lawns of the glamorous Long Island mansions and on the blindingly lit stages of Broadway, three girls will find scandal, intrigue, and romance. . .

Having not read anything by Anna Godbersen, and not really having read much historical fiction before, I was really excited to read this.

The story follows Cordelia and Letty as they escape their small hometown in Ohio for New York City.  Letty wants to be a famous singer and Cordelia has her own secret reason for wanting to go: she wants to find her father.  Once there,  her path crosses with Astrid, a girl who seems to have everything she could possibly want - but does she?  Cordelia and Letty discover not all is as it initially seems, that beneath all the wonderful glamour lurks something seedy and possibly dangerous...

Although it took me a few chapters to get into this,  once I had I found myself really immersed in the story.  I really enjoyed reading about New York in 1929 and witnessing it through Cordelia and Letty's eyes.

For me where the book really shines was in the characters.  I loved Cordelia, she seems so strong and capable but there is a softness to her too .  And Astrid was great. Initially she comes across as spoilt and demanding but as the novel progress you really got to see a different side to her.  Letty on the other hand was rather naive but she has such a great heart I couldn't help but love her.  And Charlie was awesome.  I like how I hated him to begin with but then he turned out to be one of my favourite characters.

I had no idea what was going to happen and loved the direction it took - it really surprised me.  I did think that some things seemed to happen a bit too easily for the girls in the beginning but the later half in the book more than makes up for that.   I'm really looking forward to Beautiful Days when it's published.  I have to find out what happens to these characters!

Good review, I have had my eyes on this one for a while. It was great to hear your thoughts.

I thought things happened a little too easy for them too. Especially when Cordelia's father accepted her into his family so easily. I liked the time period it was set in though, just wish there had been more information on the lifestyle of New York in that era.

I was expecting you to completely love this. I haven't read it yet but I do love The Luxe. Anna Godberson really does know how to write surprising plots.

I'm reading this soon and am looking forward to it. The characters sound great.