The Book of Luke by Jenny O'connell 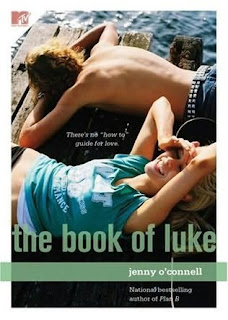 From Goodreads:  From the bestselling author of Plan B comes a funny and touching new novel about a girl, a boy, and a notebook that could ruin everything.

Emily Abbott has always been considered the Girl Most Likely to Be Nice — but lately being nice hasn't done her any good. Her parents have decided to move the family from Chicago back to their hometown of Boston in the middle of Emily's senior year. Only Emily's first real boyfriend, Sean, is in Chicago, and so is her shot at class valedictorian and early admission to the Ivy League. What's a nice girl to do?

Then Sean dumps Emily on moving day and her father announces he's staying behind in Chicago "to tie up loose ends," and Emily decides that what a nice girl needs to do is to stop being nice.

She reconnects with her best friends in Boston, Josie and Lucy, only to discover that they too have been on the receiving end of some glaring Guy Don'ts. So when the girls have to come up with something to put in the senior class time capsule, they know exactly what to do. They'll create a not-so-nice reference guide for future generations of guys — an instruction book that teaches them the right way to treat girls.

But when her friends draft Emily to test out their tips on Luke Preston — the hottest, most popular guy in school, who just broke up with Josie by email — Emily soon finds that Luke is the trickiest of test subjects . . . and that even a nice girl like Emily has a few things to learn about love.

When we first meet Emily she is being forced to move back to Boston, her boyfriend dumps her and it turns out her father is not coming with them!  But being back in Boston is not all bad. She reconnects with her old best friends, Josie and Lucy,  and together they come up with a perfect idea for their senior time capsule:  an instruction book for guys teaching them the right way to treat girls.  Of course, they decide they should test it out and who better to test it on than Luke Preston - Josie's ex boyfriend who dumped her by email!  Determined not to be a nice girl anymore Emily launches herself into the plan with gusto - but things don't go according to plan...

This was a fun read.  I like Jenny O'Connell's  writing style - she always creates really interesting characters.  I really liked Emily despite the fact that what she was doing was really mean.  And there is no way round that - the three friends are being incredibly mean.  But you can see why they do it which makes it work.  Also you get a good insight into Emily and her home life - and you take the journey with her as she learns that not all things are black and white.

I really loved Luke.  I liked how Jenny O'Connell made him three dimensional.  He wasn't just another hot guy but came across as a real person with flaws.  He hasn't always done the right thing but he's not being  intentionally mean.  And I loved the scenes with him and Emily.  They really seemed to connect - they told each other things they hadn't told anyone else.

My favourite aspect of the story though was Emily and her father and I was a bit disappointed this wasn't explored a bit more.  I would also have liked more on Emily reconnecting with her friends and looking at her relationship with her friends back in Chicago.   I would rather have had the 'test out the guide' plot end a bit sooner and have these elements become the focus but overall I enjoyed the book. And I'm definitely interested in reading whatever Jenny O'Connell writes next.

I love the sound of this and am adding it to my wishlist. Thanks for the great review!

I've had this for almost 2 years and still haven't read it. I think I should!

Whilst reading this post, I couldn't help but wonder if the title may have a biblical reference too. Calling it the Book of Luke and putting it in a time capsule. Just a thought! Sounds right up my street though.

I have been looking at this on Amazon on and off for a while. Thanks for such a detailed review. I don't really think it is my cup of tea after all but none the less it does sound fun. But not exactly romantic which is what I was hoping it would be.

Sammee, thanks for reading LUKE and writing about it. It was fun reading your thoughts and also reading the comments (While, yes, The Book of Luke is biblical, there honestly wasn't a biblical slant to the book at all). I had so much fun writing this book, and I love the relationship between Luke and Emily, too (was thinking about the kind of relationship I wish I had in high school instead of the one I had).

Thanks for including LUKE on your blog!