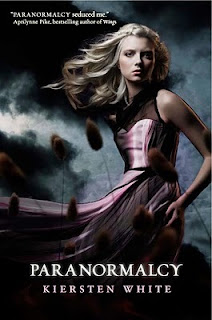 For Review: Harpercollins.  Published 6 January 2011
From Goodreads: Evie’s always thought of herself as a normal teenager, even though she works for the International Paranormal Containment Agency, her ex-boyfriend is a faerie, she’s falling for a shape-shifter, and she’s the only person who can see through paranormals’ glamours.

But Evie’s about to realize that she may very well be at the center of a dark faerie prophecy promising destruction to all paranormal creatures.

So much for normal.

This one has been on my radar for nearly a year and was one of those books that I just had to read. I just knew it would be my kind of book.  Thankfully, it lived up to my expectations!

Evie has spent most of her life working for the International Paranormal Containment Agency (IPCA).  Having spent most of her life in one foster home or another,  the agency took her in when she was eight and it became clear she could see through the paranormals glamours.  She spends her time bagging and tagging paranormals,  trying to avoid her (kind-of)  ex-boyfriend and dreaming of a normal life (including boys, school and ... er... lockers).  But when paranormals start turning up murdered on-mass, Evie starts to learn the truth  - and realises not everything was what she thought...

I loved Evie from the first page.  She's witty, fun and a great narrator for the story.  I also really liked her best friend Lish (a mermaid), as well as Racquel (her boss, and only mother figure she knows).  And I adored Lend!  This may be a bit spoilerly but a guy who can look like anyone they want including your favourite TV star?  Yep the possibilities are endless!  But more importantly he was really kind and sweet and I grew to like him more and more as the book progressed.

Reth on the other hand was a complete mystery to me.  Part of me found him scary and just a tad creepy but the other part found him completely fascinating.  I absolutely do not trust him but he is very intriguing and I really enjoyed all the scenes he was in.

The world and mythology behind the book is fantastic.  It's obviously well planned out and I'm really looking forward to seeing how it all works out.  Kiersten White has a really accessible writing style that keeps everything light and fun, but with a believability about it.   I felt completely invested in the story and the characters and I can't wait to read the next book.

Glad to hear this is a good one. I feel like I have been waiting forever for it to come out.

I LOVED this book too such great characters. I actually think of Lend as water boy and do I want one - ohhhh yes please ;D

It was bleeping fantastic!

I felt the same way about Reth. I really like him though and I think there's a hidden good side to him. I hope we learn more about him in the sequel.

I've heard lots of good things about this one! I actually forgot it was out in the UK now. I must get a copy!

I recently read this one & I loved it. I can't wait to read the sequels. Thanks for the review! :)