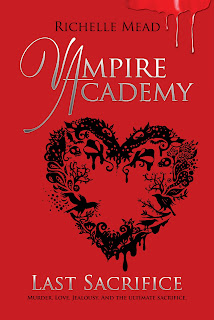 Contains spoilers for the previous books in the series.

For review:  Penguin (Razorbill)  Published 7 December 2010
Back cover:  It all comes down to now.

The queen is dead and the Moroi world will never be the same.

Rose Hathaway is awaiting wrongful execution and there exists only one man who can stall this terrible fate.  Rose must look to both Dimitri and Adrian, the two great loves of her life, to find him.
With her best friend, Lissa , in a deadly struggle for the royal throne, the girls find themselves forced to rely upon enemies and questioning those they thought they could trust

But what if true freedom means sacrificing the most important thing of all?  Each other.

I love, love LOVE this series!  And this final installment in Rose's story was just awesome!

So much happens in this one.  I've read in interviews that Richelle Mead plans her series in advance and you can definitely see the benefits to this.  Everything just fell into place, and even though I didn't see all the events coming, as soon as they happened they all made complete sense.

Rose was back to her normal self in this one.  She seems to benefit was having something to do or pursue.  And, of course, there's Dimitri.  Love, love, love him!  The scenes between him and Rose are just pure genius!  There are also a host of other characters that show up (old and new) and we get to spy on events at the royal court through Rose's bond with Lissa.  I must say for a character I pretty much disliked at the beginning of this series, Lissa has really progressed.  I adored her in this one and was very pleased by her display of strength and loyalty to Rose.  I also, if possible, grew more fond of Adrian and can now completely understand why Rose would choose to be in a relationship with him.

I'm trying hard to think of what to say without spoiling anything.  Last Sacrifice is full of the action I have come to expect from this series, but more than that this one was charged with emotion.  All of the events building up over the series reached the ultimate conclusion and answers are definitely given.  But in addition to that Mead manages to leave us wanting more.  And believe me I want more!  As much as I loved this book and find it a fitting end to Rose's story I am not ready to leave the world just yet.  I have grown not only to love Rose, Dimitri and Lissa but all the other characters we have met along the way.  I am thrilled there will be a spin off series later next year and I can't wait to catch up with the characters involved in that series.  There are definitely several I would love it to be based around.

I have had an brilliant time reading this series and know it will be one I re-read over and over again.  If you haven't tried it yet I urge you to give it a go.  I don't think you'll be disappointed!

I agree with you on the book too I loved it so much and the new and old characters. I also kind of wrote a review for it, but had a hard time because I didn't actually want to spoil it either. I'm dying to talk to some other people about it when they read it. Sorry I'm a bit of a rambler. :)