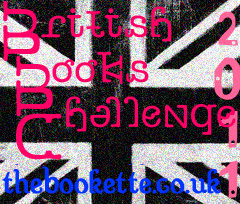 The British Books Challenge 2011 is hosted by Becky from The Bookette.  For more information on the challenge and to sign up check out this post.

I'm really excited about this challenge!  The target is to read 12 British books in 2011, but there is also the chance to earn a Crown if you read 50 British books in the year!  I want a crown lol!

So... I own the following books that I would like to read for the challenge:

1: When I Was Joe by Keren David
2: Almost True by Keren David
3: The Iron Witch by Karen Mahoney
4: The Declaration by Gemma Malley
5: The Resistance by Gemma Malley
6: The Legacy by Gemma Malley
7: The Thirteen Curses by Michelle Harrison
8: The Set Up by Sophie McKenzie
9: Girl Missing by Sophie McKenzie
10: Six Steps to a Girl by Sophie McKenzie
11: Three's a Crowd by Sophie McKenzie
12: TimeRiders: Day of the Predator by Alex Scarrow
13: Revolver by Marcus Sedgwick
14: White Crow by Marcus Sedgwick
15: Tyme's End by BR Collins
16: Being by Kevin Brooks
17: Bad Faith by Gillian Philip
18: Crossing the Line by Gillian Philip
19: Troubadour by Mary Hoffman
20: From Where I Stand by Tabitha Suzuma
21: Looking for JJ by Anne Cassidy
22: Nobody's Girl by Sarra Manning
23: Let's Get Lost by Sarra Manning
24: Solace of the Road by Siobhan Dowd
25: The London Eye Mystery by Siobhan Dowd
26: Dead Gorgeous by Malorie Blackman
27: Boys Don't Cry by Malorie Blackman
28: Scarlet by Cathy Cassidy
29: Dizzy by Cathy Cassidy
30: Indigo Blue by Cathy Cassidy
31: Angel by Cliff McNish
32: Breathing Underwater by Julia Green
33: Out of the Depths by Cathy Macphail
34: The Enemy by Charlie Higson
35: Fallen Grace by Mary Hooper
36: Being Billy by Phil Earle
37 -41: The Dark is Rising Sequence by Susan Cooper (Books 1-5)

And, of course,  participating in a challenge is an excellent excuse reason to buy some new books... so I would also like to read:

Crikey!  That's actually quite scary lol!   Of course, some may change, and I may only manage 12 books but I'll let you know how I get on by crossing books off the list once I've read them:)

You've got some great reads on this list, and some that I haven't read but want to. I'm going to be doing this one too but I haven't got my whole list yet - I have a feeling I'll be copying some of your choices!

You have just given me some more to add to mine - THANKS :D

*blinking Nora!* LOL What a list! I am very impressed. I also think you should edit this and take some credit for the challenge because I wouldn't have ever started even thinking about it if it wasn't for you. Very pleased to see Angel on that list. You'll love it.
You are so going to hit 50 books!!!