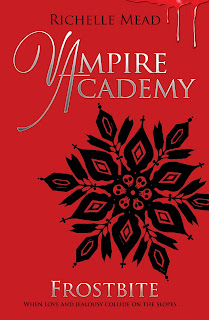 From Goodreads: Rose loves Dimitri, Dimitri might love Tasha, and Mason would die to be with Rose…

It's winter break at St. Vladimir's, but Rose is feeling anything but festive. A massive Strigoi attack has put the school on high alert, and now the Academy's crawling with Guardians—including Rose's hard-hitting mother, Janine Hathaway. And if handto- hand combat with her mom wasn't bad enough, Rose's tutor Dimitri has his eye on someone else, her friend Mason's got a huge crush on her, and Rose keeps getting stuck in Lissa's head while she's making out with her boyfriend, Christian! The Strigoi are closing in, and the Academy's not taking any risks….This year, St. Vlad's annual holiday ski trip is mandatory.

But the glittering winter landscape and the posh Idaho resort only create the illusion of safety. When three friends run away in an offensive move against the deadly Strigoi, Rose must join forces with Christian to rescue them. But heroism rarely comes without a price…

Frostbite is the second book in the Vampire Academy series. You can read my review for book one here.

If I had been at all worried that this wouldn't be as good as the first book I needn't have been. This is shaping up to be one awesome series!

Not only having to deal with the aftermath of a brutal Strigoi attack, Rose also has to deal with her mother - a brilliant guardian she hardly sees - and the possibility Dimitri's affections are turning towards someone else.  Confused, and wanting to forget about Dimitri,  she turns to her friend Mason, who has a massive crush on her.  But when she tells him something she shouldn't she has to find a way to fix it.  Before it's too late...

Again there is plenty of action and character development,  making this a great sequel.  I loved meeting Rose's mother and really enjoyed their interactions.  You can really see where Rose gets it all from.  I also really liked Mason - really sweet and obviously besotted with Rose.  Christian is also proving to be a great character that I want to see much more of.  And Dimitri is still on fine form!  I really do love him *sighs*  The scenes between him and Rose are electric - they have great chemistry and I'm really rooting for them as a couple.  Finger's crossed!

I loved the ending of this one.  Again Richelle Mead shows she can skillfully write action scenes - but I also applaud her ability to shock.  Perhaps others saw it coming but I really didn't - and I love that unpredictability this series has to offer.  Shadow Kiss here I come!

I LOVE this series! If you enjoyed this, just wait until Shadow Kiss. Now that will blow your mind!

Oh man. Wait til you read Shadowkissed. It's about to get WAY intense. :)