I'm delighted to present a guest post from Tamsyn Murray, the author of My So-called Afterlife and My So-Called Haunting.
--- 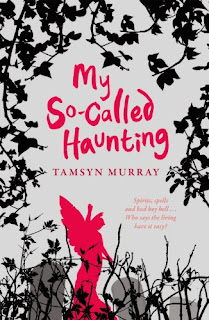 My So-Called Haunting is the follow up book to My So-Called Afterlife and it introduces Skye Thackery. She's fourteen years old and has been psychic all her life. In fact, she's been seeing ghosts as long as she can remember and it takes more than things that go bump in the night to faze her. But which famous ghosts are at the top of her afterlife meet-and-greet list?

What's not to love about Casper? Bored of scaring people, all this ghost wants is to make friends with the living and that's something Skye can identify with. She thinks they'd have a great time hanging out together - after all, he is the friendliest ghost of all!

OK, so he goes on a bit about joining the Headless Hunt but he knows all the secrets of Hogwarts, including that passageway into Honeydukes at Hogsmeade. Skye reckons he'd be the perfect guide to show her around and since everyone else can see him too, she wouldn't feel so weird about talking to him. Maybe he could even introduce her to Cedric Diggory?

3) Lucy Shaw
Lucy was the first ghost that her 'Uncle' Jeremy ever saw and Skye thinks he talks about her all the time, to the point where Skye is kind of glad Lucy has already passed across. Even so, she's curious about Saint Lucy and wouldn't mind meeting her, if only to see what all the fuss is about. Now there's an idea for a future book...

4) The Mackenzie Poltergeist
The MacKenzie Poltergeist is a troubled soul who haunts a vault inside Greyfriars Kirk in Edinburgh. Legend has it that the ghost is the spirit of a seventeenth century lawyer who tortured and killed others for their religious beliefs and was buried in the churchyard. Edinburgh is Skye's hometown and she's always wondered if she could help the poltergeist find peace. She's never quite been brave enough to venture inside, though.

5) Anne Boleyn
Henry VIII's second wife was the one he plunged his country into turmoil for. He was so consumed with desire that he invented a new religion in order to marry her. Unfortunately, she didn't give him the son he wanted so he accused her of witchcraft (amongst other things) and had her executed at the Tower of London. Needless to say, Skye would love to know if she was actually a witch. And maybe Anne could help her with her History coursework...

You can meet Skye for yourself on my website, where the first chapter of My So-Called Haunting is available to read. And you can buy it from Amazon here. Happy reading!

Thanks Tamsyn! I love the idea of Skye meeting Lucy!

Skye meeting Lucy, that would be fun :) I love Casper. And Nearly Headless Nick. And I love the stories of Anne Boleyn's ghost still haunting the Tower of London. Sends shivers up my spine!

I love Tamsyn Murray's books. And a tour of hogwarts by Nearly Headless Nick sounds like aperfect day out to me!

This is so much fun.

I hope my copy of MSCH arrives soon. Royal Mail must be super busy or something.

Such a fun guest post! Hanging out with Anne Boleyn sounds extremely cool.