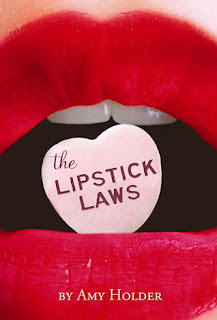 The Lipstick Laws by Amy Holder

From Goodreads: At Penford High School, Britney Taylor is queen bee. She dates whomever she likes, rules over her inner circle of friends like Genghis Khan, and can ruin anyone's life as easily as snapping her perfectly manicured fingers. Just ask the unfortunate few who have crossed her.

For April Bowers, Britney is also the answer to her prayers. With zero friends and nothing close to a boyfriend, April is so unpopular, kids don't know she exists. That is, until Britney notices her. One lunch spent at Britney's table, and April is basking in the glow of popularity.

But Britney's friendship comes with a price tag.

How much is April willing to pay?

I'm liking the sound of this - very mean-girls-esq! And I really want to know just what April is willing to pay!  It's published April 4th 2011 by Houghton Mifflin Harcourt/Graphia.
Posted by I Want To Read That at 06:00

Email ThisBlogThis!Share to TwitterShare to FacebookShare to Pinterest
Labels: Amy Holder, I want to read that..., The Lipstick Laws

Reminds me of Heathers :)

I read this one and it's very good. :) You can request it trough Netgalley. :)

Thanks Nina - requested it:)

I'm not too sure about this, but I love the cover.