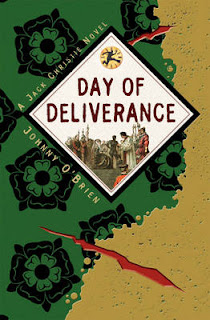 Jack and Angus’s time travels are heating up again, and this time the boys must save Queen Elizabeth I from an early death. Meeting the playwright Marlowe and a young actor named William Shakespeare along the way, Jack and Angus will have to use all their bravery and skill to thwart their archenemy, Pendleshape, and his misguided notions of changing history.

As many of you will know, I love anything to do with time travel so I had a good idea I would enjoy this one. I think it's a really good series to introduce readers to history in a fun way - there are even added notes on the time period at the end which covers what details were accurate.

I really enjoyed the characters of Jack and Angus and there was some really funny banter between the two. I would have like to have seen more of it as it was really good. There is also plenty of action to keep readers entertained, and although I did find the pace drag a little in parts it soon picked up again and I found myself really excited by the turn of events.

I really liked the way the author incorporated the time travel aspect into the story. It's not just a device to move the story back in time but is a major part of the mythology. We have two sides of a debate - the Revisionists who believe we should change the past to improve the present, and VIGIL who are dedicated to protecting the past and preventing the Revisionists from making any changes. Add in the fact that Jack and his father are on opposing sides and you get a really interesting dynamic.

It's a great idea and a series that would definitely appeal to boys, as well as girls looking for books with adventure. I'm really looking forward to seeing what period in history Jack and Angus travel to next. 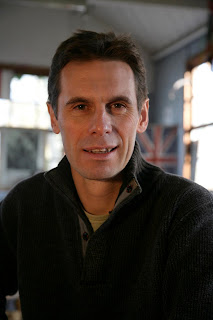 Johnny O'Brien also kindly took the time to answer a few of my questions...

How did you come up with the idea for Day of Deliverance?

I wanted to do something Elizabethan – because it is such a fantastic period of history. Not only have you got the great political and religious turmoil of the age but you have this incredible artistic renaissance – Shakespeare, Marlowe and much more besides. It was then a case of looking for a possible historical turning point during the period around which to build the plot and so I came to focus on the Armada – which of course is one of the great stories in European history.

The first book in the series is called Day of the Assassins. Can you tell us more about it?

The Jack Christie books are action stories which have a time travel theme involving our modern heroes (Jack and Angus) in real historical events (like the assassination in Sarajevo in 1914, the defeat of France in 1940, Elizabethan England and the Armada in 1588).

Day of the Assassins is the first in the series and is based just before the First World War. I got the idea when clearing out a cupboard at my Dad’s home in Scotland. It contained all this memorabilia from the First World War - when my Grandfather fought in the Irish Guards. There was all sorts of stuff including uniforms, medals and even a citation from Winston Churchill. My Grandfather was injured in the war and this triggered the idea for the book. Basically, it got me thinking about the choices people make and the consequences that follow – even from quite trivial decisions. This made me think about the causes of the First World War – and the trigger point of the assassination of Archduke Franz Ferdinand in Sarajevo in 1914. I wondered what I would have done if I had been there – would I have stopped it and thereby perhaps prevented the war. It was a small jump from that to Jack and Angus – ordinary kids who go back in time and face exactly that choice.

Do you have a favourite character from the books? Or one you particularly enjoyed writing for?

There are loads of different characters in the books. One of my favourites is August Pinckard-Schnell – a mad German balloon pilot who Jack befriends. Here Jack meets the Professor for the first time:

“Jack peered down nervously – he couldn’t believe how far up they had already travelled. Maybe sixty yards, and the wind had already taken them way aft of Dreadnought, which already looked like a toy ship. He could make out the specks of the crew, and all the features of the ship – the guns still pointing starboard in the direction of the targets – and the wide white wake. The unfortunate seaman who had fallen from his tether pole was bobbing around in the water like a champagne cork. He had been thrown a lifebelt – but would have a job to swim to it. Jack slumped back down onto the bottom of the basket. He was panting, and reached into his pocket for his puffer. He glanced up at the balloon observer standing over him. He wore a full-length, weather-beaten, brown leather coat with a high collar. His neck was wrapped in a bright red scarf. The leather skullcap was placed on his head at a slight angle. He pushed up his aviator’s goggles onto his forehead and peered curiously at Jack with piercing blue eyes, as if examining some sort of botanical specimen. Then, he smiled warmly, thrust out his hand and, in a surprisingly high somewhat accented voice, said, “Professor August Pinckard-Schnell… delighted to meet you.”

And a favourite scene?

In ‘Assassins’, Jack, Angus and the Professor are escaping from an Austrian castle in a cable car being chased by baddies. They decide to use the escape hatch to lower themselves from the cable car:

“Suddenly, Jack noticed that the roof hatch in the opposite car had been flicked open. A VIGIL guard was crawling up onto the roof with a grappling iron. In a moment, he had tossed the device over to Jack’s car before crawling, monkey like, across the precipitous divide that separated them. There was a loud scraping on the roof hatch of Jack’s car, as the guard started to prise it open. Jack wasn’t about to find out what would happen next. Swallowing hard, he plunged out through the floor hatch, just as the others had done moments before. Initially, he closed the friction device too hard, so he barely moved on the rope. By gradually loosening it he gained speed. He glanced downwards. The professor and Angus had made it to the ground and both seemed to be safe. Suddenly the speed of the rope through the friction device accelerated. It didn’t feel right. Instinctively, Jack locked the device and waited, swaying in the light wind, suspended from the rope, the Austrian Alps all around. And then, slowly, he felt himself being pulled… up. There was no doubt about it… he was being pulled back towards the cable car. He felt a wave of panic as he realised what was happening. The guard above had started to yank the rope up… with Jack suspended on the end. He had to make a decision. Angus and the professor had made it to the upper bank of the river that meandered down the valley, but as the cable car had continued to move before finally coming to rest, Jack was now suspended directly over the river. It was quite wide and he could spot one or two black pools that might cushion a fall. But there were also rocks, and he had no idea how deep the water was. He felt another violent tug on the rope as he was dragged upwards. The adrenaline gave him a moment of clarity. It was all he needed. As the rope was tugged up once more, he took a deep breath and flicked open the friction device.”

I really enjoyed the historical notes at the end of the book. Did you need to do a lot of research for each book?

Yes – I wanted people to have a great read but also maybe learn something in the process about history, so the notes are to help that. It does take quite a lot of research and you find yourself asking yourself some pretty odd questions:

- Can a 14 year old boy fit in the barrel of a naval battleship gun?
- When was the first cable car built in the Alps?
- Do people really free climb up the Colleges of Cambridge?
- Did heads of state have body doubles in the sixteenth century?
- What kind of beer would you drink in a London pub in 1588?

Are there more books planned for the series?

Absolutely. Day of the Assassins and Day of Deliverance will be followed by Day of Vengeance which is all about the Battle of Britain, defeat of France in 1940, the visit of Hitler to Paris in 1940 (check out you tube for actual footage of this sinister historical event) and the German Vengeance programme. ‘Vengeance’ has just been submitted to the publisher and we have then got a fourth coming out after that – I would welcome ideas for the bit of history Jack and Angus should go to next – because I have no idea!

Who are some of your favourite authors? Are there any books you would recommend?

Herge for the Tintin series – each one a masterpiece.

This year I have read:

Thanks Johnny! I'm looking forward to reading more of Angus and Jack's adventures:)

If you want to check out the rest of the tour the links are included below: