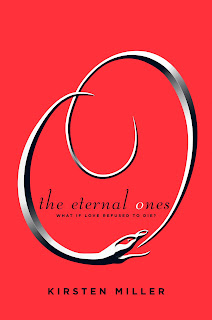 For review: Puffin (Razorbill). Published 19 August 2010
From Goodreads: What if love refused to die?

In New York, Haven meets Iain Morrow and is swept into an epic love affair that feels both deeply fated and terribly dangerous. Iain is suspected of murdering a rock star and Haven wonders, could he have murdered her in a past life? She visits the Ouroboros Society and discovers a murky world of reincarnation that stretches across millennia. Haven must discover the secrets hidden in her past lives, and loves¸ before all is lost and the cycle begins again

I had heard so many great things about this one, yet I still managed to go into it not really knowing much about it beyond the fact it's about reincarnation. I think I was expecting an epic romance but what I got was so much better!

The story centers around Haven, who has had visions since she was a young child of places she has never visited and of people she has not met. When Haven sees a famous actor on a news broadcast, and recognises him as the boy she constantly sees in her visions, she realises she has to go to New York and find out what her visions really mean. What unfolds is a fabulous mystery that had me completely hooked from the very first chapter.

I loved Haven. Granted, at times she was incredible frustrating - almost running in circles, not knowing who she should trust and often, I thought, being rather too trusting. But she has a great voice - she's strong, independent and just very easy to like. Her friend Beau is probably one of my favourite characters ever - I loved their banter and his confidence and knowledge of who is really is. Especially given the flak he has to take for it.

Once the story moves to New York and Haven meets Iain Morrow it became a roller coaster ride for me. I did not want to put the book down until I had finished it. Bleary eyed, and at 4am in the morning, I reached what I can only describe as the best ending ever. Although I had worked out some parts of the mystery, I just loved how it still managed to completely take me by surprise at the end and I can't wait to see how this story continues.

I loved Kirsten Miller's writing - she has the ability of creating a mystery that will have you guessing and trying to piece all the pieces of the puzzle together. The Eternal Ones is a fantastic beginning to what I believe promises to be a brilliant series.

Email ThisBlogThis!Share to TwitterShare to FacebookShare to Pinterest
Labels: 4.5 Stars, For Review, Kirsten Miller, Reviews, The Eternal Ones

I know!! This book was a total surprise. If you let yourself be guided by the cover (agh) then you will miss out on a great read =]

I've heard so many great things about this! I'm very much looking forward to it now.

I'm reading this at the moment. I wasn't sure if I was going to like it before starting but a quarter of the way through, I'm really enjoying it.

I enjoyed this but definitely not as much as you did. The ending didn't come as a surprise for me. Interesting...