Up In Flames by Nicole Williams 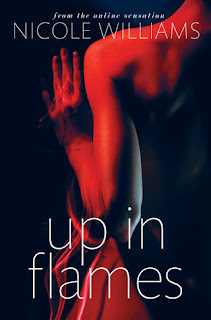 From Goodreads: Elle Montgomery is a good girl. Born and raised in a small town in Washington State, she's always done exactly what she's supposed to and what everyone expects of her. She helps out at the cafe her family owns, and has been dating the pastor's son, Logan, since she was allowed to go on her first date at sixteen. Having just graduated from high school, and knowing that Logan wants to put a ring on her finger and get married as soon possible, Elle feels like her life is already mapped out. Cole Carson's life couldn't be more different. An adrenaline junkie, he has worked as a smokejumper for the past three summers, roaming from town to town following the fires. Cole lives his life day to day and dreads the thought of putting down roots or being tied to one person.

Following an awkward, embarrassing first meeting, Elle knows she should keep away from Cole and the feelings he ignites in her. And Cole just can't help but pursue Elle, the girl who seems immune to his charms. But as summer heats up, their attraction grows, and as tensions between them run high, Elle and Cole realise that one way or another, they're going up in flames...

Like Crash/Clash/Crush this is pretty much addictive from the get-go! It’s easy to read – I very quickly became engrossed in the story. It was a bit predictable – but that’s kind of the fun. Sometimes I want to read something where I know what’s going to happen, where it's going to go  – and  I get my enjoyment from watching it unfold. Maybe predictable is the wrong word? But hopefully you know what I mean.

I really liked Elle but I wish she had dealt with Logan better – I felt he deserved much better than she treated him. And I think that might put some readers off – but the pressure to live up to all the expectations put on her by those around her kind of explain her actions. That part of the storyline was really good.

Plus I loved Cole. Did I already say that?

Email ThisBlogThis!Share to TwitterShare to FacebookShare to Pinterest
Labels: 4 Stars, For Review, Nicole Williams, Reviews, Up in Flames