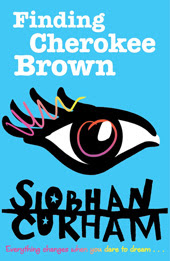 As part of the Blog Tour for Finding Cherokee Brown, Siobhan Curham has stopped by with Cherokee's Literary Heroines!
---

Finding Cherokee Brown is about a teenage girl who decides to write a book about her life in the hope that it will make her become the type of heroine she loves to read about – and in so doing, help her stand up to her bullies. Here are some of her favourite literary heroines, some of whom feature in the book, some of whom I’d imagine she’d love – and the reasons why . . .

Anne Frank is a major influence upon Cherokee. In the novel she talks about how reading Anne Frank’s diary was the first time she realised the power of books to really make you stop and think about life. And it is this that indirectly leads her to start writing her own book. In one scene, near the beginning of the book, Cherokee is having a terrible time being taunted by the school bullies and she thinks to herself: ‘Don’t let them beat you, Anne Frank wouldn’t let them beat her. She didn’t even let the Nazis beat her. Not where it counted, in her head.’ This is a crucial turning point for Cherokee and shows how much strength and inspiration she draws from her literary heroine, Anne Frank.

Little House on the Prairie is another of Cherokee’s favourite books, and its author Laura Ingalls Wilder another literary inspiration. She loves the sense of freedom and adventure Laura Ingalls Wilder writes about. At one point in the book, when Cherokee is describing how awful her first day at high school was, she refers to Little House on the Prairie, saying: ‘I’d been sitting in our classroom, faking smiles like I had a twitch, while thinking, Oh God, why couldn’t I have been born in 1867 to a pioneer family in the American Midwest and only have to worry about making it through the next winter rather than seven long years at high school?’ The irony is that she will discover later on that her roots aren’t all that far from Wilder’s at all.

Katniss Everdeen from The Hunger Games

At the start of Finding Cherokee Brown, Cherokee dreams of becoming a ‘kickass literary heroine’. Although she doesn’t refer to The Hunger Games, I’m sure she would love Katniss for her courage and incredible hunting skills, and I’m sure reading about Katniss would be a real inspiration to her.

Lisbeth Salander from The Girl With the Dragon Tattoo

Although this book is for adults, if Cherokee read it I’m sure she would be rooting for Lisbeth and would really admire her for the way in which she fights back against her attacker. When Cherokee gets her new haircut I did have an image of Lisbeth Salander in mind when I was writing the description.
---
Thanks Siobhan!

I think Katniss Everdeen is awesome enough to be everyones literary heroine, right?

Make sure to check out the rest of the tour - see my sidebar for details:)

I read and reviewed Finding Cherokee Brown earlier in the week and it was brilliant :)

Oh, I love Katniss! And I'm really glad you mentioned who Laura Ingalls Wilder is as I had no clue when Cherokee was talking about here.