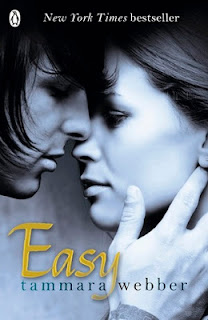 From Goodreads: Easy is a New York Times Bestseller - a must-read for everyone who loves Slammed by Colleen Hoover and the New Adult genre. Deeply romantic and utterly gripping, this is not to be missed.

Jacqueline seems to have a knack for making the wrong choices. She followed her boyfriend to his choice of university, disregarding her preference. Then he dumped her. She chose a minor she thought she could combine with her music studies, but she's falling behind. And then, leaving a party alone one night, she is attacked. If it wasn't for the timely intervention of a stranger, she would have been raped. Now she must make a choice - give up and give in, or toughen up and fight on. Only the support of the man who is tutoring her and the allure of the guy who saved her from the attack convince her that it's worth fighting on. Will Jacqueline now have to make a choice between them too? And can she make the right decision? It's not easy . . .

I was really blown away by this story. I had been recommended it by a friend – I hadn’t really heard much about it before that although I had seen it listed on the Kindle bestsellers for a while – so I decided to give it a try. And I absolutely loved it! I’m so pleased it’s been published in paperback by Penguin.

I really like the way the story takes place in college – it is something I haven’t seen in many YA stories before this (although I’m beginning to think this may start to be a bit of a trend ).

I loved Jacquline’s voice. She really nice – at first I couldn’t understand why she would follow her boyfriend to college but they had been together for a long time, and snippets into her home life indicate that her parents have a tendency to ignore her at times. But she’s really easy to relate to, she get a lot stronger as the story progresses and I loved her patience with Lucas.

I love Lucas! He’s a bad boy but nice boy – which will make much more sense when you read it! He definitely has issues (and mega reaons for having them!) but he is such a great character. Yes, he is a bit hot and cold with Jaqueline – but he’s also incredibly sweet with her too. And I loved seeing Jaqueline strip down the wall he has around him – and let her in. Their relationship builds slowly and they definitely have chemistry! It’s really sweet and romantic!

I also thought the way this tackled the issue of rape was well done. There are consequences for Jacquline’s decision not to report her attack – and the way that people react when the person repsonisble is accused feel spot on. The ending felt a bit dramatic but at the same time I was glad Jacquline had the opportunity to fight back and prove to herself she’s not a victim. Plus Lucas is awesome!

Glad to hear you enjoyed this one as I'm just about to start reading it. I've heard lots of good things about it and want to read more books within the New Adult genre.

I've heard such great things about this that I really want to read it now!

I really want to read this - glad to hear you liked it so much!

Awesome review, I was really pleasantly surprised by this one as well