Missing Me by Sophie McKenzie 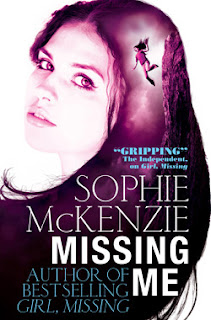 From Goodreads: Six years have passed since the end of Sister, Missing and Madison is now a teenager. During a visit to her older sister Lauren, Madison learns that their biological father was an anonymous sperm donor and sets out to track him down. Her search bears fruit sooner than she expects, but is the father she discovers all he seems? As Madison gets drawn into a mysterious investigation involving missing girls and secret hideaways, she finds herself in more and more danger. A tense and thrilling end to the bestselling series, not to be missed!

Having really enjoyed both Girl Missing and Sister Missing I couldn't wait to see how Sophie McKenzie would conclude the series. Add to that the fact it's set 6 years later and narrated by Madison - well I was seriously excited to read this one! And I have to say Sophie Mckenzie absolutely blew me away - it was really good!

The decision to make Madison narrate the story is a stroke of genius! Madison has enough similarities in narrative voice to Lauren making the switch in narrative seamless, but there is also enough of a difference (she comes across as much softer) that is doesn't feel like just more of the same. And Madison's drive to seek out her biological father felt real and believable. I imagine that Annie would not be a easy parent to deal with at times!

I loved catching up with Jam and Lauren six years later - and adored the fact they are still very much together. I love Jam and think he is a great balance for Lauren - plus the idea that they could still be together after meeting so young definitely makes the romantic in me smile.

There are new characters in this one.  Wolf really stands out, and I really liked  the budding relationship between him and Madison.  The 'baddy' was rather scary in this one too!  Again there are many twists and turns, all expertly done. I found reading this one really exciting and enjoyable - I steamed through it! And I loved the danger - I felt the stakes were even higher in this one!

If you enjoyed the others in the series you are going to love this one!

Yay! So happy to hear that Jam and Lauren are still together. So cute! :)