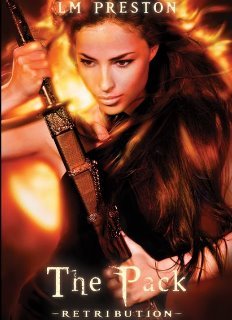 From Goodreads: Revenge doesn't have a name, but has chosen a victim—Shamira. But she's never been the type to lie down and let someone hurt her family or her friends. In order to find the mastermind behind the threat to all she cares about, she must give up the one person who's found his way into her guarded heart, Valens. Valens refuses to back off easily, and neither will Shamira's friends. They join forces with her in order to deal with a new enemy who seeks to kill everyone in Shamira's life that dared save the missing kids on Mars.

I enjoyed the first book, The Pack, when I read it in 2010 and was really pleased to learn there was a sequel. I was keen to catch up with Shamira and Valens.

The story is set a year after the events of The Pack. Having spent that time training with her team, they about to take part in their last training mission when things don't go according to plan! Resolved to get to the bottom of what is going on Shamira starts to wonder if she is putting her teams, and new friends, at risk and is determined to keep them safe, even if it means letting them go...

This one definitely starts with a bang - we go straight into the action and I really enjoyed that. I got back into the world really quickly too and I really liked the setting. Set in the future and on Mars this has a futuristic feel but at the same time is grounded in reality - having read so much dystopian lately - this has a very similar feel.

As I said this one is actioned pack from the get go and it doesn't let up. LM Preston skillfully manages to combined this with quieter moments between the characters and both works incredibly well. It makes it exciting to read but also gives you the hook you need to stay invested in the story.

The characters are my favourite aspect of the story though and I was pleased to catch up with Shamira and Valens, as well as the rest of the characters we met in the first book. I was please to see Shamira and Valens still together, even if she was still finding it hard to open up to him. I really adore their relationship - it's sweet and he is incredibly caring towards her. I really loved it. The other characters are well fleshed out too - I loved seeing her interact with her family - especially Taren and her father (I love him!)

Definitely worth checking out - the setting makes this one stand out from other books I'm reading at the moment and I really liked the characters.

You can check out my review for the first book, The Pack, by clicking here

There are load of exciting things happening during the Blog Tour! Check them out!

and LM Preston has a grand prize for you all to enter:

RaffleCopter Grand Prize:
You can win a:

You can also check out the whole blog Tour - see below for details:

You can find LM Preston at her: