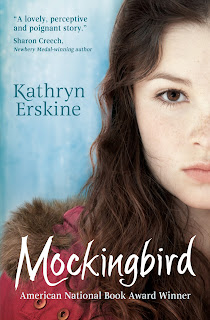 From Goodreads: 11-year-old Caitlin has Asperger’s syndrome, and has always had her older brother, Devon, to explain the confusing things around her. But when Devon is killed in a tragic school shooting, Caitlin has to try and make sense of the world without him. With her dad spending most of his time crying in the shower, and her life at school becoming increasingly difficult, it doesn’t seem like things will ever get better again.

A heart-warming story of loss and recovery that won the American National Book Award 2010 – one of the most moving books you’ll ever read.

I found myself really invested in this story. It's about a community and family dealing with their grief after a school shooting, and is told through the eyes of an 11 year old girl with Asperger's syndrome who lost her brother in the shooting.

Before I picked this one up I'd been told it was an incredibly moving read and I have to say I completely agree. There is just something about seeing this tragedy through Caitlin's eyes that makes it especially poignant. I loved getting to know her brother through her memories of him and seeing the world the way she sees it.

I don't know much at all about Aperger's syndrome so this really opened my eyes to what must be like. Everything is very black and white for Caitlin - she takes things very literally - and also has problems with things we all take for granted - such as emotions and reading facial expressions. She doesn't understand a lot of what is going on around her but at the same time she can be incredibly perceptive too. And her obsession with finding 'closure' rang true - it's as if she believes there is a single thing that she can find that will make this all better.

I loved Michael too and could really see how the two could become friends. I thinks there is something very innocent when you are Michael's age - you don't guard your emotions the way you do when you get older - so it made sense to me that Caitlin would find him easier to read.

I really enjoyed the way it all came together in the end too. I'm not sure Caitlin really understood what her suggestion really meant for her father and the community but I thought it showed that she had grown and could grow more.  And I loved the present from Mr Walters - the idea that she might now be ready for colours.

I'm very intrigued to see what else Kathryn Erskine has written - this certainly left an impression.

This sounds like my kind of book! Great review.

On a complete whim, I bought this the other day. Glad to hear you liked it, as I hadn't heard a single thing before I purchased it :)