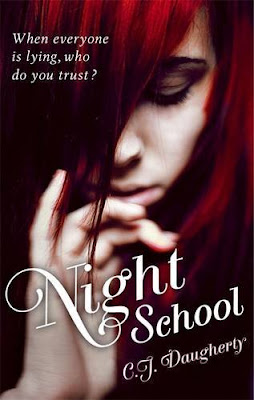 From Goodreads: Sometimes school is murder.

Allie Sheridan's world is falling apart. She hates her school. Her brother has run away from home. And she's just been arrested.

This time her parents have finally had enough. They cut her off from her friends and send her away to a boarding school for problem teenagers.

But Cimmeria Academy is no ordinary school. Its rules are strangely archaic. It allows no computers or phones. Its students are an odd mixture of the gifted, the tough and the privileged. And then there's the secretive Night School, whose activities other students are forbidden even to watch.

When Allie is attacked one night the incident sets off a chain of events leading to the violent death of a girl at the summer ball. As the school begins to seem like a very dangerous place, Allie must learn who she can trust. And what's really going on at Cimmeria Academy.

This sounds so good! It's been described as 'The Secret History for the YA reader.'

Email ThisBlogThis!Share to TwitterShare to FacebookShare to Pinterest
Labels: Christi Daugherty, I want to read that..., Night School

Ooh, I haven't heard of this one. I definitely want to read it.

Wow the cover is gorgeous! I would love to read this! It sounds spooky!

Wow the cover is gorgeous! I would love to read this! It sounds spooky!