Between by Jessica Warman 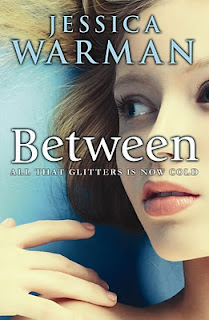 From Goodreads: Only the good die young. Right? Elizabeth Valchar has it all: friends, money, beauty, a cute boyfriend and assured popularity. But on the eve of her eighteenth birthday, she is found drowned next to her parents' boat. Everyone thinks it was a tragic accident - teens drinking on a boat, a misstep leading to a watery death. But Liz is still here after death, and she doesn't know why. There are gaps in her memory. Her only company Alex, a boy killed by a car a year earlier, Liz sets out to piece together her life. But their small coastal town is hiding many secrets - about families, boyfriends and friendship. Plus, Alex hates Liz for being mean when they were alive. Was she as squeaky clean as she thinks she was? Could it be that she herself is hiding the biggest secret of all? Can Liz discover the truth? And if she does, who can she tell? An engrossing, compelling thriller that peels back the layers of small-town life to expose true, ugly, cruel human nature.

This is described as 'A Lovely Bones for teens' - and since I loved The Lovely Bones - it became a must read for me.  And I have to say it completely captured my attention in the opening chapter!

The story is told from Liz's point of view after discovering she has died.  Still here, and not really sure what is happening, she meets Alex - a boy killed the previous year - and together they try to work out how she died.  Was it really an accident or something more sinister?  Not able to remember much about her life she slowly has to relive it to piece it all back together - but will she like what she sees?

I guess you could say Liz is a typicall mean girl - on the surface at least.  Her and her friends are popular, they are mean to other kids for no reason - the usual stuff.  But the more of Liz's life that I relived with her the more I began to like and understand her.  Her life hadn't exactly been easy - and one memory in particular that we experience with her is truly harrowing.  The other characters have back stories too - and we get to understand them a bit more through Liz's observations in the present day and her memories.  It's Josie and Richie who really stand out among her friends.  Richie because of his relationship with Liz and the need to still connect to her in some way.  And Josie because although I never particularly liked her I did feel sorry for her.  You find out early on in the book that everyone in the neighbourhood believes Liz's dad is also Josie's father but no one ever acknowledges it - including Liz and her father.  Liz's dad also really stood  out - he's truly grieving over the death of his daughter and those scenes are especially poignant.

At first I was confused why Liz had gaps in her memory.  Instead of having all of her memories she gets to re-experience them - and piece it all together.  As the story progressed I realised this made so much sense - by reliving each memory Liz is actually experiencing it how it was - it's not tainted by her memories of it.

One aspect of this story that I absolutely adored was the relationship between Liz and Richie.  Neither characters were perfect - both had faults - but together they just made sense and they obviously cared for each other.  Seeing how the two were when they were with each other endeared them to me - and I felt I was seeing their true characters.

Of course there is also the mystery of how Liz died and I enjoyed trying to work it all out.  Some might spot the clues but I was utterly oblivious - and I loved how it all panned out. But for me it was less about how Liz died and more about Liz's journey - discovering what had happened and facing up to the truth. It really made me think - about the choices we make and those made for us - and about who people really are and how much we actually get to see.

Jessica stopped by yesterday to talk about Liz's running playlist - you can read the post here.
Posted by I Want To Read That at 12:00

Email ThisBlogThis!Share to TwitterShare to FacebookShare to Pinterest
Labels: 4.5 Stars, Between, For Review, Jessica Warman, Reviews

I'm reading this right now and already agree with everything in your review (though some of it is just intriguing and I need to go and read more...)
Thanks for a great review!

I actually didn't enjoy this all that much. I'm glad you did, though!

I have this one still to read, and I'm really looking forward to it!