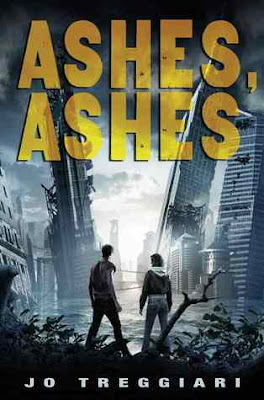 From Goodreads: A thrilling tale of adventure, romance, and one girl's unyielding courage through the darkest of nightmares.

Epidemics, floods, droughts--for sixteen-year-old Lucy, the end of the world came and went, taking 99% of the population with it. As the weather continues to rage out of control, and Sweepers clean the streets of plague victims, Lucy survives alone in the wilds of Central Park. But when she's rescued from a pack of hunting dogs by a mysterious boy named Aidan, she reluctantly realizes she can't continue on her own. She joins his band of survivors, yet, a new danger awaits her: the Sweepers are looking for her. There's something special about Lucy, and they will stop at nothing to have her.

I've got to admit it was the cover for this one that really caught my eye and I love the sound of it!  I'm really liking the sound all the dystopian/post apocalyptic type stories being released at the moment.

Email ThisBlogThis!Share to TwitterShare to FacebookShare to Pinterest
Labels: Ashes Ashes, I want to read that..., Jo Treggiari

I want to read this one too!

I agree the cover is great.

I definitely agree with you on this one! It looks and sounds amazing!