Blackwatch Blog Tour : The Man In The Marketplace (Guest Post)

I'm really thrilled to present a guest post from Jenna Burtenshaw, author of Wintercraft and it's sequel Blackwatch.
--- 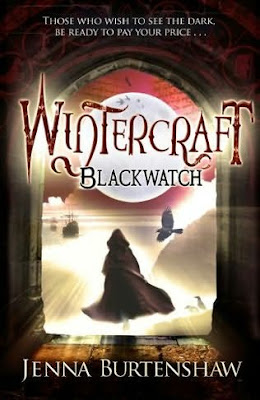 The Man In The Marketplace

When I first pictured Silas Dane standing on the rooftop of a market square with flocks of blackbirds dying around him, I knew he belonged within the pages of Wintercraft. Here was a man whose life had been altered irrevocably by knowledge contained in the book at the very centre of the story, yet it took him a long time to make his presence known. He is a man of few words; a mystery to those who fear him and a nightmare to those he is sent to hunt. It is hard to believe now that Silas was not originally a character in the first book. He walked into one of my later drafts and changed everything.

As the leader of the High Council’s wardens, Silas has commanded men, served as a soldier in the ongoing war between Albion and the Continent, and worked as a collector: hunting down people for the High Council. Having been sold into warden training by his family at a young age, serving Albion quickly became a way of life. He lived to a tight code of personal honour and gained the respect of those he served until - twelve years before the events of Wintercraft - his loyalty to his government faced its greatest test.

The councilwoman, Da’ru Marr, made Silas an unwitting subject of her experiments into the veil between the living and the dead. She was attempting to do something that had only ever been done successfully once before: tear a soul from a living body, trap it within the deepest depths of the veil, and bind it to her own. She wanted a soldier who would serve her implicitly; a man with a broken soul whose connection to the veil made him heal swiftly from illness and injury. A protector who could never die.

After two years of being tested and tortured in Feldeep Prison, Silas proved his continuing worth to the High Council and resigned himself to their service once again. But living with a torn spirit has taken its toll upon him. His connection to the woman who stole his life causes him to endure endless spiritual pain. He has barely aged a day since the experiment that changed him twelve years ago, but his experiences have made him cruel and vicious. Under his command, the wardens spread fear across Albion as they gather people to serve in the war. His dead grey eyes reveal no humanity and he thinks nothing of murdering those who stand in his way.

Silas is my favourite character to write for in the books, but he is also the most difficult, because he is unpredictable. Once he starts working outside the council’s control, there is no way of knowing what decision he will make next. He trusts no one, but respects those who behave honourably. He wants to protect his country, yet loathes those who govern it. He is a man of contradictions and that makes him very interesting to me.

Since Wintercraft was published in 2010, I’ve heard from a lot of people who dislike Silas at the beginning of the story, but choose him as their favourite character in the end. I like that people see something special within him, because I knew he wasn’t a typical ‘villain’ right from the start. Silas carries many secrets. It took me a long time to uncover all of them, but I know a lot more about him than has been revealed so far in the books. I see him as an honourable man who was forced into a life he did not want. He has a past and it has changed him: from the moment his father sold him to the wardens at ten years old, to the night he finds Kate Winters and sees her as a tool to help end his suffering.

Because of his fearsome reputation, Silas lives an isolated life with only a loyal crow as his companion. It has travelled with him since his days spent serving as a high-ranking soldier, and the story of their first meeting is one I would love to tell one day. The crow is one of Silas’s few true allies and I couldn’t imagine them apart.

If events in Silas’s early years had been different, I know he would have become a very different man. He is a natural protector, trained to kill and to enforce the policies of a council who are slowly bringing his country to its knees but, deep inside, there are some glimmers of the good man he may have become.

Silas has been silent for a long time. He is tired of life and tired of pain, but his story is far from over. I want him to find the peace he is looking for, but fate has set him on a very different course. That, however, is a story that is yet to be told.
---

You can find more information about the Wintercraft series at its website here. And you can find Jenna Burtenshaw on Twitter and her blog.
Posted by I Want To Read That at 06:00

Email ThisBlogThis!Share to TwitterShare to FacebookShare to Pinterest
Labels: Blackwatch, Blog Tour, Jenna Burtenshaw, The Man In The Marketplace

I just love Silas. I love the way that Jenna made me hate him to begin with and love him by the end of the series.

Sounds like a fascinating character and stories. I'll have to check them out!

Silas is MY favourite character as well, so this was a wonderful and interesting post to read! Thanks :)