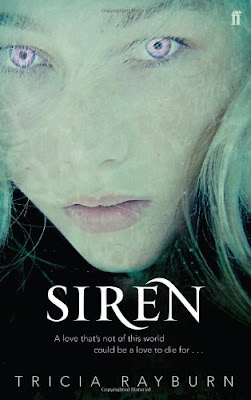 For review: Faber and Faber.  Published February 2011
From Goodreads: Seventeen-year-old Vanessa Sands is afraid of everything—the dark, heights, the ocean—but her fearless older sister, Justine, has always been there to coach her through every challenge. That is, until Justine goes cliff-diving one night near the family’s vacation house in Maine, and her lifeless body washes up on shore the next day.

Though her parents hope that they’ll be able to find closure back in Boston, Vanessa can’t help feeling that her sister’s death wasn’t an accident. After discovering that Justine was keeping a lot of secrets, Vanessa returns to Winter Harbor, hoping that Justine’s boyfriend might know more. But Caleb has been missing since Justine’s death.

Soon, it’s not just Vanessa who’s afraid. All of Winter Harbor is abuzz with anxiety when another body washes ashore, and panic sets in when the small town becomes host to a string of fatal, water-related accidents in which all the victims are found, horrifically, grinning from ear to ear.

Vanessa turns to Caleb’s brother, Simon, for help, and begins to find herself drawn to him. As the pair try to understand the sudden rash of creepy drownings, Vanessa uncovers a secret that threatens her new romance—and will change her life forever.

I really enjoyed Siren - it's a great mix of paranormal, romance and mystery.

Vanessa is a great character.  She thinks of herself as afraid of everything but her sister's death seems to trigger something in her because she comes across as very different.  Yes,  she does have fears, but she's very determined to find out what happened to Justine and the real reason for all the deaths that have occurred since.  She could have just gone home and tried to forget all about it but she doesn't, which I think says a lot about her character.

I loved Simon, especially his tendency to completely 'geek' out every now and then, and I thought he had great chemistry with Vanessa. They come across as great friends, giving their relationship a genuine feel and I could honestly see why they were attracted to each other.  I also really liked Caleb, Paige and Betty.  In fact I would say the characterisation as a whole is really great and one of the things I really liked about Siren

I also really enjoyed the mystery element and piecing everything together.  The paranormal aspects of the story were mixed into this really well.  I found the book to be cleverly plotted - everything seemed to happen for a reason even if you didn't understand what it meant at the time.  There are still several things that need answering so I'm really looking forward to the sequel.  I am now very invested in both Vanessa and Simon and am really excited to see how their story progresses.

I liked this one too!!! Not everybody liked it you know. Can't wait for Undercurrent.

This is one I've been wanting to read!

Wow this book sounds really good.
Sounds like a new and exciting paranormal element, and I'm definitely adding this title to my list of books to read.. :)
xx
Awesome blog btw!

This is such a wonderful book - I'm with you on loving Simon and his nerdiness and the chemistry between him and Vanessa. Bring on the sequel.

I am loving the sound of Simon. Everyone should geek out more often! So I'm thinking I should buy this one. I really like the sound of it. Yay!