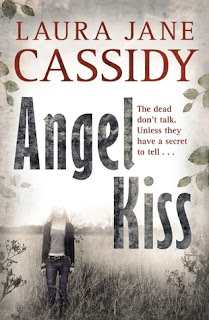 From Goodreads: Jacki King is fifteen and adjusting to her new life in a small village. She's missing Dublin but she's making new friends: artistic Colin, feisty Emily - and Nick, gorgeous yet unavailable. But no sooner is Jacki settled than the torturous headaches and nightmares begin - followed by strange visions, voices and signs...Jacki refuses to believe that something paranormal is happening. But then she discovers the unsolved murder that occurred in the village years before ...

Email ThisBlogThis!Share to TwitterShare to FacebookShare to Pinterest
Labels: Angel Kiss, I want to read that..., Laura Jane Cassidy

It does sound good!

Your right that is a good tagline

A bit creepy... I will reserve judgment until someone has read it and can give an indication of the scare factor.

It does sound great!

I'm looking forward to this one!