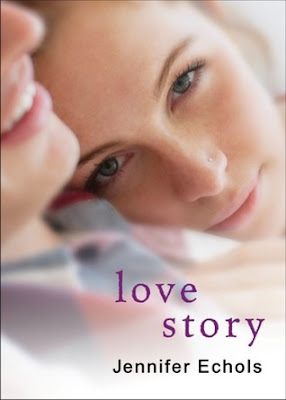 From Goodreads:
WRITE WHAT YOU KNOW.

Erin Blackwell is headed to college in New York City to study creative writing and earn a living as a romance novelist. Her grandmother has other plans: she approves of the college, but she wants Erin to major in business and then come back home to Kentucky to run the family’s famous racehorse farm. There is no way Erin will agree. Studying in New York and writing her way into a career is her escape from the farm and the family tragedy that happened there. So Erin’s grandmother decides Erin really will live life as a starving artist. She takes Erin’s future job running the farm, her inheritance, even her college tuition, and gives them all to Hunter Allen.

Hunter has lived on the farm for years. He’s Erin’s age, he’s the stable boy, and he’s the romantic dream of every girl in her high school. But he was involved in the family tragedy. Erin has always given him a wide berth. And he’s a slick opportunist. She’s furious that he fooled her grandmother into giving him Erin’s birthright and sending him to Erin’s college.

At least she’s free of him in her creative writing class. So she pens a story that has haunted her lately, in which the horse farm heiress at the very first Kentucky Derby starts a forbidden affair with the lowly stable boy. Unfortunately for her, the day she’s sharing this story with her New York classmates, Hunter walks in. He’s switching to her class. And after reading about himself in Erin’s story, he writes his own sexy assignments that lure Erin into dangerous fantasies about what could have been between them, and what might be.

I love, love, love Jennifer Echols so I am sooooooooooo looking forward to this one!  It's published July 2011.
Posted by I Want To Read That at 17:28

Email ThisBlogThis!Share to TwitterShare to FacebookShare to Pinterest
Labels: I want to read that..., Jennifer Echols, Love story

I love Kentucky tales. I must add this to my list.

This sounds great! I've loved previous books I read by Jennifer Echols so I'll definitely be adding this to my wishlist!

To be honest, the summary of this book alone isn't making me wanting to read this book - BUT it is written by Jennifer Echols, one of my favorite authors so of course I can't wait to read it!

I actually haven't read anything by Jennifer Echols before...a situation that I must remedy soon so I'm adding this one to my wishlist!

One I'm looking forward to as well. :)
Lisa ~ YA Literature Lover

I loooved Going too Far, but I was disappointed by Forget You. I hope this new one is good! I like the premise.

*raises hand* I'm looking forward to this one too! Ace. :D

Yes. Definitely looking forward to this one.

Are you on Goodreads?