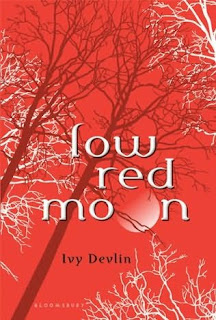 For Review: Bloomsbury.  Published 3 February 2011
From Goodreads: Avery Hood is reeling from the loss of her parents--and the fact that she can't remember what happened to them even though she was there.

She's struggling to adjust to life without them, and to living with her grandmother, when she meets Ben, who isn't like any guy she's ever met before.

It turns out there's a reason why, and Ben's secret may hold the key to Avery finding out what happened to her parents...

But what if that secret changes everything she knows about--and feels for--Ben?

Having already been recommended this one I was excited to read it.  It also looks stunning:  the cover is a lovely (shiny)  red and the inside has little tree designs at the bottom of each page and at the beginning of each chapter.  Also,  the word 'moon' is always printed in red, which for some reason I just loved!

The story follows Avery.  Her parents have been brutally murdered and despite being found with her parents bodies she has no recollection of what happened that night - except that she saw a flash of silver. Forced to live with her grandmother Renee, someone she hasn't spoken to in a while, she finds herself completely lost.  When she meets the new boy Ben, she feels an instant attraction.  But when she see his eyes flash silver she begins to doubt whether she can really trust him...

I loved Avery from the start.  You can really feel her grief for her parents and how lost she feels.  I also liked how she seemed content to be her own person and not worry about 'fitting in'.  Despite the relationship between her and Ben starting very quickly and being quiet intense I really liked it.  I liked that he came across as mysterious but kind, and I thought the two has really good chemistry.

The mystery element - who murdered her parents - was my favourite aspect of the story.  I loved how Avery remembered bits and pieces - and how this made her doubt who she should trust.  I had no idea who was going to be responsible and the final reveal was definitely a shock.  And quite scary too!

I also liked the writing. It felt very atmospheric, and creepy.  The author does a great job in amalgamating all the story elements together.  Avery's loss feels very real, the mystery very clever and the paranormal aspect fitted in and didn't feel out of place.  I thought it all meshed very well.  The only thing I would say is that there were times when I had to re-read certain passages to understand what was going on.  I got a little confused and muddled - but as I did read this one late at night it could have just been me!

I get the impression that this may be the first in a series.  I certainly hope so - I really like the world created and would love to catch up with the characters.

I bought this one too this week. It was in the supermarket as I was doing my shopping and I just couldn't resist. It sounds so good and I'm glad you enjoyed it.

sounds interesting! I'll have to check it out...

This looks brilliant and I so love the cover! Great review!