Blood Ransom is the sequel to Blood Ties and is published on 1 October 2010. Thanks to Simon & Schuster I have an extract for you all to enjoy... 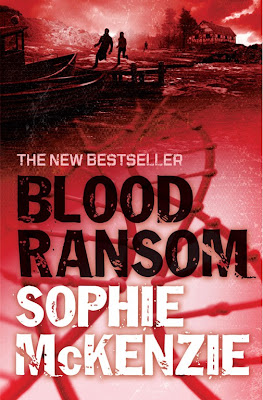 Rachel
My mouth was completely underwater now, so I was breathing through my nose, my whole body shaking with cold.
And then my legs stopped moving altogether. I flailed with my arms, panicking, tipping my head back. Mouth above water. One last yell.
And then I sank beneath the water.
The shock of the water on my face roused me for a second. Enough to register that I had to move.
Swim, my brain screamed at my limbs. Swim.
Somewhere, somehow I managed to move, clawing back the water, fighting the urge to sleep. I was running out of breath now.
Give up, said a little voice in my head. It’s the easier choice.
No. My hands banged the side of the tunnel. I reached along the mossy wall, pulling myself through the water. Which way was up? I couldn’t breathe.
And then a huge hole appeared in the wall. I could feel it with my hands. The water was even colder here.
Swim there, my brain shrieked at me.
I had no idea if I should. I’d lost all sense of where I was or who I was or what I was doing here.
All I knew was that I had to keep moving.
My lungs were going to burst. I kicked myself into the hole. Another kick. Darkness forcing itself into my closed eyes.
And another. The darkness was overwhelming.

There is also a contest at The Story Siren today which you should check out!
Posted by I Want To Read That at 06:00