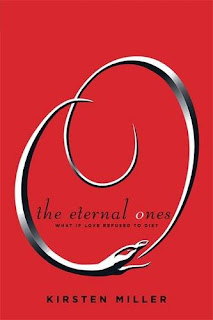 From Goodreads: What if love refused to die?

In New York, Haven meets Iain Morrow and is swept into an epic love affair that feels both deeply fated and terribly dangerous. Iain is suspected of murdering a rock star and Haven wonders, could he have murdered her in a past life? She visits the Ouroboros Society and discovers a murky world of reincarnation that stretches across millennia. Haven must discover the secrets hidden in her past lives, and loves¸ before all is lost and the cycle begins again.

I'm really liking the sound of this one. It's published August 2010 by Puffin / Razorbill
Posted by I Want To Read That at 20:26

Email ThisBlogThis!Share to TwitterShare to FacebookShare to Pinterest
Labels: I want to read that..., Kirsten Miller, The Eternal Ones

Ooh, I got this one today. It sounds amazing!

This is on my wishlist. Sounds great!

Oh, wow, loving the unique cover! It sounds like a great read too, definitely adding to my TBR list. :D

This sounds fantastic and I love the name Ethan. Great pick