I Knew You Were Trouble by Paige Toon 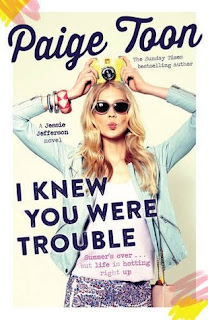 From Goodreads: Life as the undercover daughter of a rock god isn't going to be easy. How will Jessie adjust to her old boring life again after spending her summer living it up with her dad in LA? With tough decisions ahead (and not just choosing between two hot boys), can she cope juggling her two very different lives?

Summer may be over, but Jessie's story is just beginning…

I really do love this series and the world they are set in.  Johnny Jefferson (be still my heart!) is awesome and I love all the drama!

In this installment we get to see how Jessie copes with being Johnny Jefferson's daughter as well as her ever increasingly complicated love life.  I thoroughly enjoyed it and am now desperate for the next book!  I hope Paige Toon wrties many, many more!

I would still love more Barney scenes because he is the cutest character ever - and I'd like to see more of Jessie interacting with the family as a whole.  This really is becoming one of my favourite series.  I can really see it as a TV series (and have spent much too long googling actors I'd love to see play the characters...)

Email ThisBlogThis!Share to TwitterShare to FacebookShare to Pinterest
Labels: 4 Stars, I Knew You Were Trouble, Paige Toon, Reviews