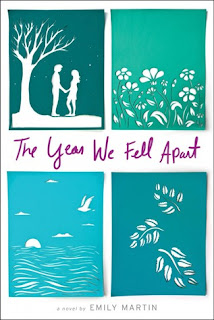 Email ThisBlogThis!Share to TwitterShare to FacebookShare to Pinterest
Labels: Emily Martin, I want to read that..., The Year We Fell Apart

That sounds really interesting! Do you know who it is going to be published by? Also, I'm giving away a copy of Dragon of the Month Club by Iain Reading at http://wordnerddb.blogspot.com/2015/10/giveaway.html if you would like to enter.