As part of the blog tour for her new novel - Find Me - Romily Bernard has stopped by to talk about her favourite hackers and detectives...
---

My Favorite Television Hackers and Detectives

He’s such an amazing Sherlock Holmes. The new adaptation is stylish, slick, and I am completely hooked. I also love how when Sherlock goes to his “mind palace” it looks like some sort of gorgeous, techie screen. Wick would be all over a computer system where you just wave your hands to go from file to file. All while wearing the perfect trench coat, of course.

2. Sonja Sohm as Kima Greggs in THE WIRE.

This series was a mic drop for me. It’s just so astonishingly good. Kima is my favorite kind of heroine. She’s cold, takes no prisoners, and is really good at her job. But it’s the softer moments, when you see Kima off the job, that make her strength so much more than bad-assery. She chooses to shut down her humanity to get the job done. She knows what she’s doing and the cost it’s going to take on her. It’s truly heroic.

3. Lisbeth Salander from THE GIRL WITH THE DRAGON TATTOO.

You had to be expecting this one, right? Lisbeth is violent, does not play well with others, and is one of the most honorable characters you’ll meet in Stieg Larrson’s universe. Don’t believe me? Take a closer look. Lisbeth only goes after people who have wronged her and, frequently, these people are far, far worse than she ever was. It’s a chilling code. You do not want to mess with this girl. 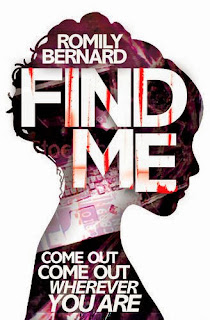 She’s a computer science whiz and, though she rarely gets out of the office, she can still wield weapons when needed. I love her loyalty even though, sometimes, it comes at a very high personal price. She believes in people even when they don’t believe in her.

Like Lisbeth, Rachel is no stranger to violence. She was recruited into an organization she thought was a black ops CIA branch. It wasn’t. And her life was never the same again. I love how she didn’t know if she could do the job at hand, but she did it anyway because the thought of not trying, not knowing if she had what it took was way worse than failure.
---

Thanks Romily! I loved Rachel in Alias too, and Benedict Cumberbatch is AWESOME as Sherlock!!!

Find Me was published 16 January.