The Fine Art of Truth Or Dare by Melissa Jensen 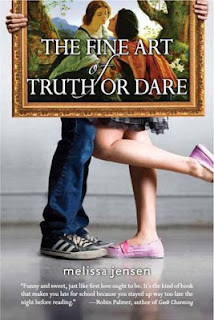 From Goodreads: Pretty in Pink meets Anna and the French Kiss in this charming romantic comedy

Ella is nearly invisible at the Willing School, and that's just fine by her. She's got her friends - the fabulous Frankie and their sweet cohort Sadie. She's got her art - and her idol, the unappreciated 19th-century painter Edward Willing. Still, it's hard being a nobody and having a crush on the biggest somebody in the school: Alex Bainbridge. Especially when he is your French tutor, and lessons have started becoming, well, certainly more interesting than French ever has been before. But can the invisible girl actually end up with a happily ever after with the golden boy, when no one even knows they're dating? And is Ella going to dare to be that girl?

I was so excited to read this one! The promise of Pretty in Pink meets Anna and the French Kiss got me practically salivating – I mean how awesome does that sound? But I have to admit I was a bit disappointed with it. There were so many elements I really loved but were a few aspects that just didn’t work for me.

I loved Ella and her journey. Having been ridiculed for a burn scar she sustained when she was younger she has a load of insecurities. So when she starts failing French and is assigned a tutor (who is none other than Alex Bainbridge: her crush!) she doesn’t quite believe he could actually like her – and I enjoyed seeing her trying to come to terms with that. I liked the way he makes her see that it doesn’t matter how other people see her – it’s how she sees herself that counts. I really did love the relationship that develops between those two – it felt genuine and real.

I adored her friends, especially Frankie and his brother (who seemed to steal every scene he was in!) And Sadie has an interesting storyline of her own. And I loved her family and their restaurant – how she helps out there all the time and the whole family dynamic was really great.

However, while I didn’t mind Ella obsession with the artist Edward Willing I found her constant conversations with him just too quirky for my liking. Not only did he just end up sounding like her friend Frankie (which kind of makes sense since she’s really just talking to herself) it just came across as a bit too weird for me and something that didn’t completely gel with the rest of her personality. I also didn’t enjoy the diary/letter snippets from Edward. I tried to like them, I really did – but if I am completely honest they just bored me. If I were to re-read this I would definitely skim over these parts – I’m not sure how much they added to the story. Instead I would have loved more time with Ella and Alex. I felt that I didn’t really get those French lessons I was promised! I wanted to feel more of the tension between them before they got together and have more scenes with them actually together.

So, as I said, there were so many aspects I really loved. I think that’s why I was as disappointed as I was – I could see how this could have been amazing! I did like it enough to buy the authors other novel – Falling in love with English Boys – so I’m interested to see what I think of that one.

Email ThisBlogThis!Share to TwitterShare to FacebookShare to Pinterest
Labels: 3.5 Stars, Melissa Jensen, Reviews, The Fine Art of Truth or Dare

I actually really liked her crush on Edward but I can see how weird it is. It may be because I studied history and have never fallen as hard as Ella did but had my weird little crushes on historical figures.

omg I loved Alex! He was just so nice, though her obession with Edward definetly entered the weird teritory especially with all those conversations. great review (:

This is a great review. I downloaded the sample of this on my e-reader and something straight away said: this is not quite going to work. So I decided against it. Glad I did now. I think it would frustrate me after reading your analysis.