I'm really excited to kick of Deborah White's Wickedness Blog Tour.  I have a giveaway for you, but first I'll hand you over to Deborah...
---

Wickedness is about a prophesy, an emerald casket and a series of scrolls that contain all the knowledge of the Egyptian god Thoth. A charismatic but very dangerous man is in pursuit of that knowledge which, he says, he will use ‘for the greater good of mankind’. (And where have we heard THAT one before?)
Two red haired girls, both fourteen, but living four hundred years apart, are the story’s heroines. Each is aided by a ‘guardian’…a ropewalker. But only one is destined to fulfill the prophesy…to be ‘the one true daughter, the red haired maiden.’

The novel grew out of something I read in Samuel Pepy’s Diary, where he talks about going to see a mummy on show at the Head and Combe in the Strand. Crickey, I thought, that’s wicked! So I immediately set about finding out all I could about Egyptology in the 17th century. It turned out that there was a lot to know.
--- 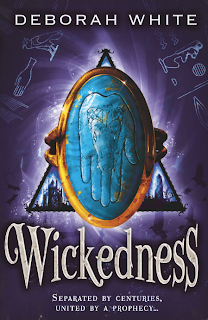 From Templar Publishing:  Wickedness is a thrilling adventure that combines history, fantasy and romance, from an exciting new voice in teenage fiction. It will appeal to fans of Hush, Hush and Twilight as well as fans of historical authors like Sally Gardiner and Mary Hooper.

Two flame-haired girls, both fourteen and living in London, but four hundred years apart. A powerful and charismatic man, an Egyptian mummy and twenty spells written in hieroglyphics on parchment. An emerald casket, a gold ring and a ropewalker. All are united by blood and by a devastating prophecy.

I have 5 copies of Wickedness plus 5 Egyptian mummy pens to give away.

The giveaway is open to UK entrants only.  Closing date is 13 September 2011.  To enter just fill in the form below. Good luck:)
This giveaway is now closed.
Posted by I Want To Read That at 06:00

Ah I wish I could enter this! This looks great, it reminds me of Revolution by Jennifer Donnelly.