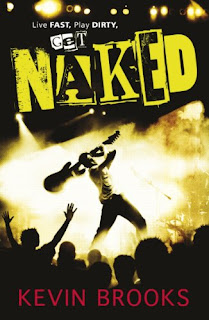 From Goodreads:  London, 1976: a summer of chaos, punk, love ...and the boy they called Billy the Kid. It was the summer of so many things. Heat and violence, love and hate, heaven and hell. It was the time I met William Bonney - the boy from Belfast known as Billy the Kid. I've kept William's secrets for a long time, but now things have changed and I have to tell the truth. But I can't begin until I've told you about Curtis Ray. Hip, cool, rebellious Curtis Ray. Without Curtis, there wouldn't be a story to tell. It's the story of our band, of life and death ...and everything in between.

This characteristically gripping novel from award-winning author Kevin Brooks will rock you to the core.

Having really enjoyed iBoy by Kevin Brooks I jumped at the chance to review this one. Set in the summer of 1976, it is an atmospheric and realistic tale of a girl's experiences. I was completely and utterly gripped!

I have to admit that I am not the biggest fan of music - I just don't have any particular interest in it - but I was completely gripped by this story. I felt as if I was transported back to 1976 and was part of this music scene. The descriptions of the time and the music are incredibly vivid and really bring it all to life.

This is not just a story about music though. I don't want to go into too much detail but there are secrets and violence too - the whole thing is very exciting and very much the gritty, realistic and intense portrayal I am beginning to associate with Kevin Brooks. Having only read iBoy prior to this I am definitely very keen to read more of his work.

Immensely thrilling - music buffs will no doubt be in some kind of heaven. For the rest of us it's an original and mesmerising tale of one girl's experience during the summer of 1976.

Woah, this looks amazing! But isn't this Billy the Kid? -http://en.wikipedia.org/wiki/Billy_the_Kid

Yes and no lol. It's all explained when you read it:D

I love the sound of this one and cant wait to read it, I'm a real music nut so I think I'll probably enjoy it a lot! :)