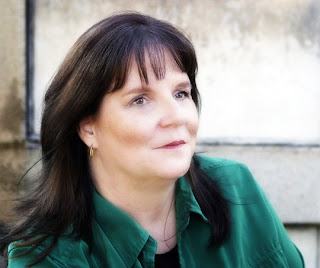 As part of the blog tour for Forbidden, Jana Oliver let me interview the rather gorgeous Denver Beck! So here we go...
---

So Beck , I understand you are a Demon Trapper – can you tell us what that involves?
Bein’ a trapper means that I’m responsible to find Hellspawn, capture them in a safe way and then deal with them as required by the law. Sounds real simple, but it isn’t. Demons are pretty clever and if they can find a way to mess ya up, they’ll do it. A trapper has to think on his feet, work out the best way to catch the fiend and to do it without gettin’ himself or others hurt. It’s never a nice job, that’s for sure.

How did you end up working for Paul Blackthorne?
I first met Paul when he was a history teacher in high school. I gave him ten kinds of grief and he just let it roll right off him. That told me he was a really cool dude. When he was laid off from teachin’ he became a trapper. After the Army, I knew I wanted to work with him and he took me on as an apprentice. He was solid, a good man and I sure miss him a lot.

There are many different grades of demon. What the worst demon you’ve ever had to face?
So far it was Grade Five Geo-Fiend that took down Paul. That was one evil mother. Grade Five’s can call up windstorms and earthquakes. They’re hard to kill and darn hard to catch.

Can you tell us a bit more about yourself?
I’m from South Georgia near the Okefenokee Swamp. I don’t have any brothers or sisters. I like things simple and like people who don’t lie to me or treat me like dirt. I graduated from high school, spent three years in the Army and now I’m a trapper. I own my own house and I’m pretty proud of that. It’s nothin’ fancy, but it’s my own place and that means a lot to me.

And if you had to describe yourself in three words what would they be?
Don’t know how best to say that: I’m just me. 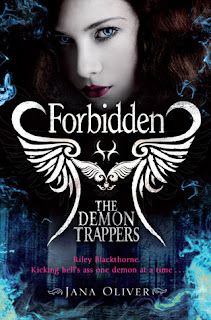 Blackthorne’s daughter Riley is also training to be a Demon Trapper. What’s she like?
::sighs:: Riley’s a handful. She’s got that steel backbone her mama had and the smarts of both her parents. She doesn’t take crap from anyone, even when it might be best that she does. She and I, well, we butt heads a lot. We’re both stubborn and that makes it hard. Still, she’s got a future as a trapper. She thinks on her feet and that’s real important. She’s a fine girl and I’m proud to know her.

I get the impression she means a lot to you…
I’m . . .real partial to her. She’s got a lot goin’ for her. She’s pretty and not just on the outside. She’s beautiful inside her heart and all and I’d really like to see her have a good life.

What are your other interests? What music do you love? Do you like to read? And do you actually get any time to do any of these things or is demon trapping more of a 24/7 kind of job?
Trappin’ is pretty much a 24/7 job. I do get to stretch out on the couch every now and then and watch some TV. I don’t read much, but I like to listen to music. Carrie Underwood, Taylor Swift, folks like that. Their songs have a lot of meanin’ to me. And I like to go down to the Armageddon Lounge and play pool. Helps me relax.

Anything else you can share with us? Maybe something that would surprise us…
Hey, if a guy tells ya all his secrets what’s he got left? ::laughs:: I thinkin’ most folks would be surprised to find that I like things tidy. The Army that taught me that. Not that many people ever see inside my house, but I am not a slob. I’ve seen some guys’ places that were pig pens. I’m just different, I guess.
---
Thanks Beck! Thanks Jana!

The next stop on the tour is tomorrow over at Blogger's Heart Books.
Posted by I Want To Read That at 06:00

Oh I have to read this series! I have the first one. Great interview! :D

I loved this interview! It was great to get a little insight on one of the characters.

I love reading Beck in any context. He's my man candy of choice! Fab interview