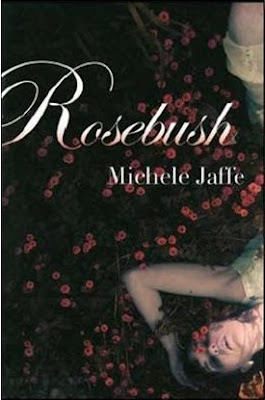 Instead of celebrating Memorial Day weekend on the Jersey shore, Jane is in the hospital surrounded by teddy bears, trying to piece together what happened last night. One minute she was at a party, wearing fairy wings and cuddling with her boyfriend. The next, she was lying near-dead in a rosebush after a hit and run.

Everyone thinks it was an accident, despite the phone threats Jane swears were real. But the truth is a thorny thing. As Jane's boyfriend, friends, and admirers come to visit, more memories surface--not just from the party, but from deeper in her past...including the night her best friend Bonnie died.

With nearly everyone in her life a suspect now, Jane must unravel the mystery before her killer attacks again. Along the way, she is forced to examine the consequences of her life choices in this compulsively readable thriller.

Email ThisBlogThis!Share to TwitterShare to FacebookShare to Pinterest
Labels: I want to read that..., Michelle Jaffe, Rosebush

This looks really good. I'l have to get this one!

Arrgh another book to add to the ever increasing list!

Sounds very interesting, and the cover is gorgeous!!
:D will add it to To-Get List.

Intriguing! I've never heard of this one, but between the premise and the cover I'm pretty much sold. Great find. :D