Some Girls Are by Courtney Summers 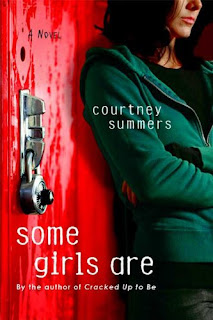 From Goodreads: Climbing to the top of the social ladder is hard--falling from it is even harder. Regina Afton used to be a member of the Fearsome Fivesome, an all-girl clique both feared and revered by the students at Hallowell High... until vicious rumors about her and her best friend's boyfriend start going around. Now Regina's been "frozen out" and her ex-best friends are out for revenge. If Regina was guilty, it would be one thing, but the rumors are far from the terrifying truth and the bullying is getting more intense by the day. She takes solace in the company of Michael Hayden, a misfit with a tragic past who she herself used to bully. Friendship doesn't come easily for these onetime enemies, and as Regina works hard to make amends for her past, she realizes Michael could be more than just a friend... if threats from the Fearsome Foursome don't break them both first. Tensions grow and the abuse worsens as the final days of senior year march toward an explosive conclusion in this dark new tale from the author of Cracked Up To Be.

I adored her debut Cracked up to be and wondered if it was possible for this to live up the hype I had created in my own mind. I needn’t have worried. This is an amazing book!

What amazes me most about this author's writing is her ability to create such raw and honest characters. Regina is essentially a complete cow at the beginning of the story – people hate her and they hate her for good reason. But what we see unfold over the course of the book is that not everyone is as they seem. I found myself warming to Regina almost immediately but at the same time I knew if I met her that might not be the case. It was just that she was written in such a way it was as if I could see right into her character and all of her complexities. Michael was the same. You could really feel how torn he was in seeing a different side to Regina and his need to carry on hating her. Their connection felt tangible. I really felt invested in their relationship and to what happened to these characters.

This is more of a character driven story – it is essentially what happens to Regina at the beginning of the story and how that escalates. Mostly though it is Regina’s journey of self discovery and I really enjoyed taking that journey with her. At times it is very intense and seriousness of the situations scared me. At others I found myself wanting Regina to make different decisions. It felt a very realistic portrayal of bullying and the emotions behind it.

I can’t think of anything negative to say about this book. Some readers may dislike the amount of swear words and the sexual and drug -use references but I felt they were needed to reflect the adult themes portrayed in the book and to keep the story feeling realistic. It wouldn’t have worked so well for me had they were not been included.

I really loved everything about this book - the writing, characters and story - and I can say with absolute certainty that I cannot wait to see what this author writes next.

Email ThisBlogThis!Share to TwitterShare to FacebookShare to Pinterest
Labels: 5 Stars, Courtney Summers, Reviews, Some Girls Are

Great review. I'm not convinced this book is my kind of thing. I think it is great that authors are writing books about such important issues but I guess I just naturally prefer espacist books. Can tell how much you loved it though!

Brilliant review! It doesn't sound like my normal read, but I think I'd enjoy this one anyway :)

Great review Sammee. I've heard nothing but amazing things about SGA, so I can't wait to give it a go.

It's great to hear how much you enjoyed it!

Fantastic revire, Sammee! Every amazing review I read of this book makes me want to read it even more!

This sounds so good! I'm not a big realism reader, but I'm learning not to rule anything out and this one sounds too good to miss. Fantastic review!

Oh goodness, this is an amazing book right?! so so glad you liked it