Even though I promised myself I would not buy any books this week as my TBR pile is ridiculously high I succumbed to these: 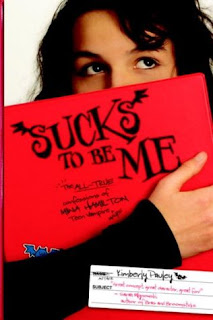 Sucks to be Me: The All-true Confessions of Mina Hamilton, Teen Vampire (maybe) by Kimberly Pauley
From Goodreads: Mina Hamilton's parents want her dead. (Or undead to be precise.) They're vampires, and like it or not, Mina must decide whether to become a vampire herself. But Mina's more interested in hanging out with best friend Serena and trying to catch the eye of the too-hot-for-high-school Nathan Able than in the vampire training classes she's being forced to take. How's a girl supposed to find the perfect prom date and pass third-year French when her mom and dad are breathing down her neck--literally? 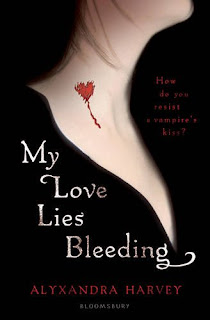 My Love Lies Bleeding by Alyxandra Harvey
From Amazon: The Blakes are rather different to your usual neighbours. They are vampires and some of the members of the family date back to the twelfth century. One of the children, Solange, is the only born female vampire known and, as such, she poses a direct threat to the vampire queen. Her best friend Lucy is human, and when Solange is kidnapped Lucy and Solange's brother, Nicholas, set out to save her. Lucy soon discovers that she would like to be more than just friends with Nicholas. But how does one go about dating a vampire? Meanwhile, Solange finds an unlikely ally in Kieran, a vampire slayer on the hunt for his father's killer.

Sometimes it is just so hard to resist buying books! I will definitely get myself a copy of My Love Lies Bleeding. Looking forward to reading your review.

I really enjoyed Sucks to be Me. Hoep you like it!

OHH My love lies bleeding looks awesome I hope you enjoy it!

A nice vampire week you had there. I wholeheartedly approve ;)

I'm not surprised you caved - those both look fantastic. I got My Love Lies Bleeding this week too, and I can't wait to read it!

I can't wait to read My Love Lies Bleeding. Hope you enjoy your books!

These books look wonderful! Have fun!

Sucks to be Me is VERY good.

Here's what I got this week! http://bookielaura.blogspot.com/2009/12/book-haul-christmas-edition.html

Have a great and safe New Year!

LOL, I succumb constantly too, my owned TBR is like 600 books!