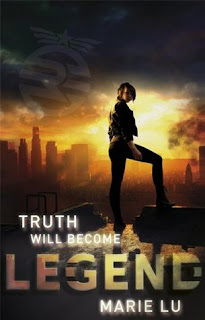 From very different worlds, June and Day have no reason to cross paths - until the day June's brother, Metias, is murdered and Day becomes the prime suspect. Caught in the ultimate game of cat and mouse, Day is in a race for his family's survival, while June seeks to avenge Metias' death. But in a shocking turn of events, the two uncover the truth of what has really brought them together, and the sinister lengths their country will go to keep its secrets.

Full of nonstop action, suspense, and romance, this novel is sure to move readers as much as it thrills.

I seriously enjoyed this one! It's a great combination of romance and suspense set within a dystopian world.

I have said many times that I love dual narration and I'll say it again here. Having the story from both June and Day's point of view gives us a greater insight into each character and what is happening. And in this case it also gives us a clear idea of just how different their worlds are.

June is intelligent, strong, honest and someone I liked instantly. I warmed to Day straight away as well - I really liked how he took care of his family and you could instantly see how he cared about others in his dealings with Tess. And despite knowing what was going to happen to Metias from the beginning (thanks to the synopsis) I still really loved his character - the way he looked out for June and had faith in her abilities. I think it was important to feel that way to understand June's drive to have his killer caught and brought to justice.

I also really enjoyed the world Marie Lu created - I could really imagine it. I want to know more about the Patriots and the Colonies - but everything we've learnt so far is superb. The amount of control the Republic has is quite chilling!

I can't wait for the next instalment. And I am super excited to hear this has been optioned as a movie - I can totally see it on the big screen!

I've been debating on whether or not I want to read this, but I think I'm definitely going to have to give it a go after reading your review!

I really enjoyed this too. And yay for dual narration!

3 out of 4 loved this book in my household too. It has the potential to be an excitng movie.

The Savage Grace has an awwesome cover. Great haul of books. Come visit me as well.

I loved this one too - and I really agree about Metias and the world. I can't wait for the next book either!!
Great review! :D

I've seen Legend around a few times but I've never really stopped and read the synopsis. It does look pretty good but not totally unique what with all the new dystopia novels out there and the book trailer isn't the best I've seen.

The Book to my Heart