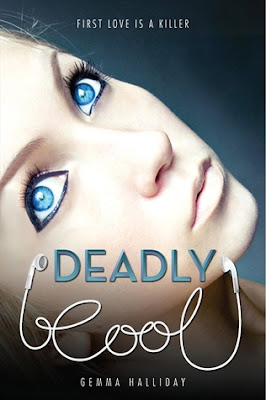 From Goodreads: Hartley Grace Featherstone is having a very bad day. First she finds out that her boyfriend is cheating on her with the president of the Herbert Hoover High School Chastity Club. Then he's pegged as the #1 suspect in a murder. And if that weren't enough, now he's depending on Hartley to clear his name. Seriously? Not cool. But as much as Hartley wouldn't mind seeing him squirm, she knows he's innocent, and she's the only one who can help him. Along with her best friend, Sam, and the school's resident Bad Boy, Chase, Hartley starts investigating on her own. But as the dead bodies begin to pile up, the mystery deepens, the suspects multiply, and Hartley begins to fear that she may be the killer's next victim.

I'm really liking the sound of this one - kind of Veronica Mars ish! And I love the cover - the way they do the title with the earphones!

Email ThisBlogThis!Share to TwitterShare to FacebookShare to Pinterest
Labels: Deadly Cool, Gemma Halliday, I want to read that...

I love the sound of it too, it's something different to what i normally read so I'm excited for it.
And the cover is AMAZING!!

I love the cover of this book. It looks SOO good. Also, it sounds pretty interesting. I've never seen Veronica Mars though!

Im a huge fan of Veronica Mars :) I own the whole 3 series on DVD lol. I am in love with the cover of this book and cant wait to read it :) New Follower
www.thephantomparagrapher.blogspot.com

Hmmm... I'm not sure. It's the chastity thing that sort of puts me off.