The Summer I Turned Pretty by Jenny Han 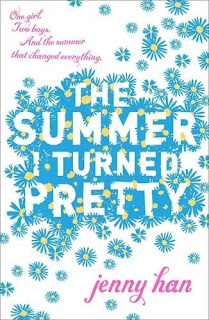 For Review: Puffin (3 June 2010)
From Goodreads:
Some summers are just destined to be pretty
Belly measures her life in summers. Everything good, everything magical happens between the months of June and August. Winters are simply a time to count the weeks until the next summer, a place away from the beach house, away from Susannah, and most importantly, away from Jeremiah and Conrad. They are the boys that Belly has known since her very first summer -- they have been her brother figures, her crushes, and everything in between. But one summer, one wonderful and terrible summer, the more everything changes, the more it all ends up just the way it should have been all along.

I REALLY enjoyed this one. I loved the concept of the book – how Belly grew up spending every summer going to Cousins. I just love the idea of doing that – the idea of knowing people your whole life and growing up with them. I spent the entire novel wishing I could have had the same thing!

I found Belly to be rather sweet. She definitely comes across as a 15 year old girl and is obviously enjoying the attention she is getting now that she is ‘pretty’. I really enjoyed the flashbacks to a much younger Belly – it gave great insight into her character.

Conrad and Jeremiah were rather awesome. Jeremiah was the one I warmed to the most – sweet and a great friend to Belly. Conrad (at the time we meet him) is obviously bothered by something so comes across as slightly harsh – but we do get to see him through Belly’s memories and that gives a true idea of who is really is. There is a scene between him and Belly toward the end of the book that I think is one of my favourite scenes ever! I also really liked Cam – he seemed really sweet and caring towards Belly.

The plot is simple but really effective. It was great experiencing it with Belly and I enjoyed watching her character grow. She didn’t make the best decisions though, and I must admit that I was slightly annoyed at her for not picking up on what Conrad and Jeremiah obviously knew - and what I felt was rather obvious. .

I loved the ending and it certainly left me wanting more. Having said that the story does end feeling unfinished so I do feel as if I’m kind of hanging in the middle. This isn’t necessarily a bad thing as it means I’m really looking forward to the next instalment and I hope there are many more to come. I'm not sure I could ever tire of these characters.

Email ThisBlogThis!Share to TwitterShare to FacebookShare to Pinterest
Labels: 4.5 Stars, For Review, Jenny Han, Reviews, The Summer I Turned Pretty

Great review--I've been curious about this book for a while now, and I definitely want to read it for myself sometime!

I have to get around to reading this. I've heard so many amazing things about it. I'm glad you enjoyed it too!

Oh, it sounds great! Thanks for the review.

I LOVE this series to pieces. Glad to see you enjoyed the first book in the series. :D

SO many great things that I keep hearing about this book. I now need to get a copy of it.

I am so glad I have this in my TBR pile. It sounds really simple and lovely.

I hear nothing but great things about this. I am so looking forward to reading it. Great review.

Glad you liked it! I've been so curious about this book, it's nice to see it's enjoyable :)