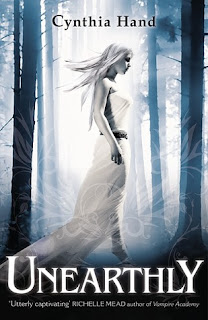 From Goodreads:  In the beginning, there's a boy standing in the trees . . . .

Clara Gardner has recently learned that she's part angel. Having angel blood run through her veins not only makes her smarter, stronger, and faster than humans (a word, she realizes, that no longer applies to her), but it means she has a purpose, something she was put on this earth to do. Figuring out what that is, though, isn't easy.

Her visions of a raging forest fire and an alluring stranger lead her to a new school in a new town. When she meets Christian, who turns out to be the boy of her dreams (literally), everything seems to fall into place—and out of place at the same time. Because there's another guy, Tucker, who appeals to Clara's less angelic side.

As Clara tries to find her way in a world she no longer understands, she encounters unseen dangers and choices she never thought she'd have to make—between honesty and deceit, love and duty, good and evil. When the fire from her vision finally ignites, will Clara be ready to face her destiny?

Unearthly is a moving tale of love and fate, and the struggle between following the rules and following your heart.

I really don't understand why I didn't read this one sooner.  I bought it as soon as it was published but for some (stupid) reason it's been sat on my shelf all this time.  The coming release of Hallowed - the second in the series - reminded me I really should read it.  And I am so glad I did because it is seriously good!

I loved Clara.  She's just really likeable - not too nice but really nice all the same.  I really liked her family too - especially her brother Jeffrey.  And her mother was interesting - I'm very intrigued by all the secrets she seems to be keeping.  I also think there may be more to the story of why Clara's dad left than we think.

The mythology in this is great - it's different enough to stand out.  Clara already knows that she is part angel - but at the same time there is a lot she doesn't know.  We get to learn a lot of that with her at the same time which is nice.  But also this reads a lot like a contemporary rather than a paranormal - there is a great deal of focus on relationships (friends, family and romance) which balances it nicely.

Now... Tucker.  What can I say?  He is just soooooo gorgeous and I can honestly say that if Clara does not end up with him at the end of this series there may be major tantrums on my part.  He is just completely and utterly swoon worthy!  Plus I love how their relationship and friendship develops.

Christian has the potential to be interesting - especially in Hallowed - but here he just didn't really make much of an impression.  I think I was too blinded by the brilliance of Tucker to be honest - but I do hope that he plays a bigger role in the next book so we can get to know him better.  I want to love him too.

I am seriously looking forward to Hallowed now - I want to know what Jeffrey was up to?  What are her mother's secrets and will we ever know?  Plus I really need to know if Midas is okay... and of course I just want more Tucker!

Is this the UK cover? Because this is way prettier than the US one!

I really have to get myself a copy of this.